Apples delivered with a side of biodiversity 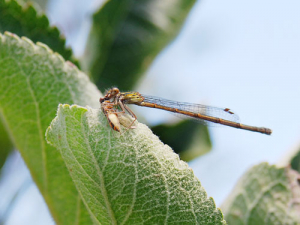 Most people might assume organic growing methods are better for biodiversity, but a new study by Plant & Food Research scientists shows a different approach can work just as well.

“The results were good – surprisingly good,” she says. The survey of plants and 210,000 insects caught in traps in 15 Hawke’s Bay orchards found orchards managed using the Integrated Fruit Production system, or IFP, had similar or even slightly better biodiversity index scores than the organic orchards.

Libby Burgess, one of the study authors, says international markets are increasingly interested in the ecological impact of food production.

“They want to know how we grow crops, as well as what we produce,” she says.

Working in partnership with grower organisation New Zealand Apples & Pears Inc, scientists and growers developed the IFP system specifically to find ways to control pests that would have the lowest impact on the environment. Once proven in trials it was rapidly adopted in commercial apple orchards in the late 1990s.

A range of practices, such as monitoring pest numbers with pheromone traps, minimised the use of chemicals. That made it possible to make the best use of what is now the main weapon against pest species: carefully-vetted introduced natural enemies, or biological control agents.

IFP is now a mature system so the Plant & Food Research team decided it was time to have another look at the impact it was having on plants and insects, and to compare IFP orchards’ biodiversity directly with organic orchards.

They found insect species sometimes differed between the IFP and organic orchards but every orchard had ample species to carry out ecological functions such as nutrient cycling and pest control.

Malone says the outstanding feature in the results was that the traps collected around 10 times more Froggatt’s apple leafhoppers in organic orchards than in the IFP orchards. The sap-sucking leafhopper Edwardsiana froggatti is a serious pest, causing leaf damage and affecting bud and fruit development. Apart from this result, the survey showed undetectable differences in pests across orchard types.

“More importantly perhaps, there were no differences in the abundance and diversity of the key natural enemies that help to keep apple pests in check,” Malone says. “This result shows IFP is protecting those beneficial species as intended.”

“We were surprised and pleased to see that native or endemic species made up around 40% of the total in all orchard types,” she says. “That’s what overseas markets want to see - that biodiversity and especially local flora and fauna are protected - and that is what we’ve got.”

“IFP works – and probably even better than we had hoped. The fauna in IFP orchards is just as rich as it is in organic orchards and that’s great news for the way we operate our orchards and for our brand overseas.”

New Zealand Apples & Pears technical manager Tim Herman is delighted to see the proof that biodiversity in IFP orchards is on a par with organic orchards.

“This data shows that what we are doing in IFP matches that in our organic production systems and helps us underline the environmental credentials of IFP in our export markets,” he says. “Export markets continue to challenge us to do better and minimise our environmental footprint. This demonstrates that we are meeting their expectations.”

The study is published in the journal Agriculture, Ecosystems & Environment.