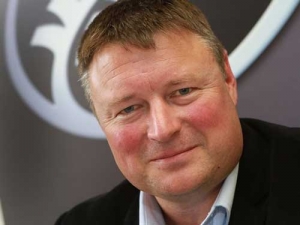 Claims that Silver Fern Farms approached the Government for funding and/or sought a meeting with Finance Minister Bill English for over a year have been debunked by the co-op's chair Rob Hewett.

When asked by Rural News about the validity of the claims Hewett had a blunt two word answer: "That's bullshit."

This rebuttal came late last month in a sit-down with Rural News – with both Hewett and Shanghai Maling president Wei Ping Shen – to discuss the proposed merger of the two companies, at Silver Fern Farms' head office in Dunedin.

In a wide-ranging interview, Hewett and Shen also dismissed claims of a possible procurement war if the deal went ahead.

Critics of the proposed deal claim the newly cashed-up company will burn off competitor meat companies offering over-the-top prices, which will leave SFF as the 'last man standing'. This, critics believe, will see red meat producers in NZ totally dependent on the company and risk low livestock prices in the future.

"We have no desire to start a procurement war," Hewett says. "We have seen enough procurement wars in the past; it erodes value and is not sustainable." He says such assertions are "a simplistic and stupid argument".

Hewett believes if the deal with Shanghai Maling is sealed (SFF shareholders will vote on this on October 16 at a special meeting) the logic of the new company's strategy will see farmers getting better prices, not a procurement war.

"We want to pay farmers more, but that will be earned through the implementation of our strategy and the synergies we will make through our alignment with Shanghai Maling."

Meanwhile, Shen says his company chose SFF for its first foray into the beef and lamb sector outside of China because of the "booming demand" for the products in his country, especially by the younger generation.

"SFF's brands are the strongest in the Chinese red meat market and with Shanghai Maling's reach of 1000 supermarkets in the country and our parent company Bright Foods' 60,000 outlets there is no better investment for SFF shareholders than this one," he said.

Shen also believes there is potential for more jobs to be created from the joint venture than the company's current 7000.