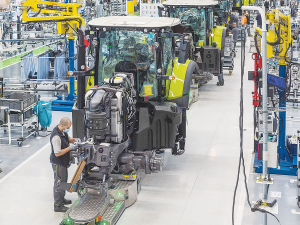 Future production at Claas’ Le Mans plant will allow the completion of 60 units a day, pushing the annual capacity from the current 10,000, up to more than 13,000 units.

After giving the go-ahead for a major investment at its Le Mans plant back in 2017, Claas recently showcased its €40 million spend.

This has largely been centred around a complete renewal of the assembly line and the digital transformation of the plant. It brings the total investment by the German family-owned company, at Le Mans - the development centre in Vélizy, and the test-and-validation centre at Trangé – to about €80 million since the acquisition of Renault Agriculture in 2003.

Modernisation of the plant is said to allow the manufacture of increasingly complex and individually configured tractors.

This involved reconfiguration of many processes, particularly in the area of in-house logistics. Indeed, the use of virtual reality technologies enabled digital simulation of all processes during the planning stage, including simulated production for tractor models yet to be released.

At the heart of the upgrades, 40 Automated Guided Vehicles (AVG), each with a capacity of up to 20 tonnes, carry the tractors around the plant during assembly – along a 1.2km line that houses 100 workstations. Moving from the first to the last assembly station, the load AGV capacities are said to be enough to deal with all current series as well as planned future models.

Currently building five Claas tractor series from 75 to 460hp, future production will allow the completion of 60 units a day, pushing the annual capacity from the current 10,000, up to more than 13,000 units. Tractor exports from Le Mans have risen from 33% to 70% during the last 20 years, with Germany being the most important market.

The new logistics infrastructure means employees have significantly more space at their ergonomically designed workplaces, with parts only immediately needed, delivered to the assembly line just in time. Some workstations are equipped with headsets so that workers benefit from easier communication, while LED lighting technology ensures a pleasant working atmosphere that resembles natural lighting conditions.

Those locations include, in Germany, Claas E-Systems in Dissen and Claas Industrietechnik in Paderborn, where the Terra Trac crawler track units for the Axion 900 Terra Trac and the CVT for the Arion 500 and Arion 600 model series are built.

Made in New Zealand looks at the wealth of design and manufacturing ability we have in New Zealand, creating productive and cost-effective products for the agricultural sector. Machinery editor Mark Daniel takes a closer look at Trimax Mowing Systems, catching up with owner and founder Bob Sievwright.