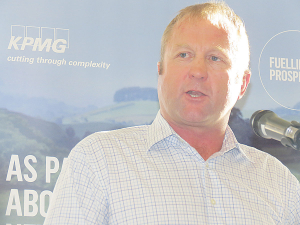 The building trade war between the US and China and the impasse at the World Trade Organisation (WTO) are two significant global events that demand the attention of New Zealand in its dependence on trade for continued success.

Alongside these two geopolitical power plays runs a creeping tide of protectionism in the form of nationalist inward-looking policies that challenge the global value chain model which is increasingly becoming the future of food.

For NZ it is clear that as a country with a population smaller than Sydney, access to international markets is critically important for our future.

While international debate and brinksmanship dominate the world of trade, NZ is quietly getting on with efforts to secure our future. In the big trade issues at the WTO we have been asked to coordinate efforts to reform this crucially important organisation and make it more relevant for the future.

Our strategy for trade is now firmly anchored on higher value opportunities in the context of the rapidly changing shape of the agri-food sector in NZ. Growth in the production of commodity products from livestock is reaching a ceiling as environmental limits and our response to climate change imposes pressure on traditional farming. The focus on producing and marketing higher value goods from NZ is working.

In the seven years from 2012 to 2019, primary sector export revenue grew 43% to an impressive $46 billion. There is plenty more growth to come with the unprecedented growth in horticulture and plant-based products and new industry development and ongoing efforts in value creation from our traditional industries.

Present day risks to NZ’s strategy are real. The US-China trade war, and the ongoing inability of the UK to finalise Brexit and its separation from Europe have hugely disrupted smaller countries such as ours. China is now our largest trading partner, and disruption in China or the US spills over into international markets affecting NZ exports.

In the European theatre, while the UK needs to finalise its future relationship with the EU, the longstanding relationships built up by NZ companies in this part of the world are at risk as uncertainty remains. Numerous visits by those of us involved in trade and commerce to all of our key markets are important as we continue to reinforce our relevance as a constructive and valuable partner on agriculture and trade issues globally.

As a number of countries retract and implement protectionist policies, our experience has been that open, trade oriented agricultural policies encourage the development of a competitive, resilient and responsive primary sector.

Fifty years ago, about three quarters of NZ’s agricultural exports went to Europe. An active effort to diversify across global markets in the time since then means that this proportion is now down closer to 12%. As a result, producers have seen economic, environmental and social benefits over the longer term.

The good news for NZ is that in spite of the real risks to international trade we are seeing unprecedented demand for nearly all of our agri-food and fibre exports. The quality and integrity of our products are highly valued, but it is the values of NZ and its people that now resonate strongly with consumers.

As we look to a future where demand for food is strongly anchored to the way food is produced and the values of the people producing it, NZ’s future looks assured. In an increasingly challenging international trade environment we need to chart our own path to prevent the actions of others undermining our future.