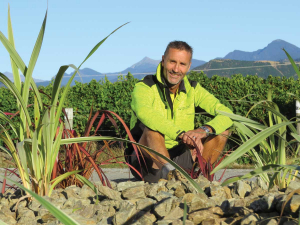 In late March, the company’s Grounds Supervisor and his crew planted natives at Staete Landt vineyard on Marlborough’s Rapaura Rd, the latest move in an 11-year programme to increase the biodiversity of Cloudy Bay’s vineyards.

Mark says the project began when the company became involved in the Marlborough District Council’s Tui to Town project, aimed at creating corridors of plantings through the vine landscape of the Wairau Valley.

He jumped in nine years ago and has continued the momentum beyond the Tui to Town scheme, including substantial plantings along waterways on the Widow’s Vineyard.

Estate Director Yang Shen is also on board with biodiversity, and began last year’s company Christmas party with a native planting session by staff, says Mark. “Now our social club committee is looking at doing the same thing… with plantings before a drink and get-together.”

Mark says the company has a fund for the plantings and an appetite to do more, with a focus on enhancing areas not suitable for grapes. Cloudy Bay won the design prize at the 2020 Marlborough Wine & Food Festival, for an oasis-themed stand that had zero waste and stacks of plants.

He’s been keeping the natives used in the display healthy since that February event, waiting for good autumnal planting conditions to plant them out at Staete Landt, as the grape harvest goes on around him.

Cloudy Bay Technical Director Jim White says Cloudy Bay wants to be “ahead of the curve” in terms of restrictions on herbicide use in New Zealand, and the company is exploring the machinery, people and innovation it will require to transition.

That includes researching and trialling new technology for weed control, which is a challenge on Marlborough’s stony soils.

There is no one-size-fits-all in Marlborough, he says. “We are looking at a block-by-block approach across our vineyards.”