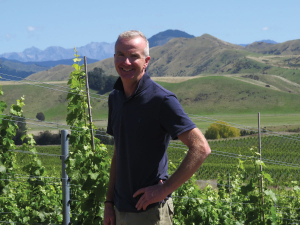 He and Pyramid Farm owners Chris and Julia Dawkins were adamant there'd be no contouring of the Marlborough landscape, 250 metres above sea level, where three generations of Dawkins have protected and nurtured the soil.

"I don't see what right I have to do that quite frankly, when I came to a farm that's been farmed really well for the last 70 years, and where through good management they have beautiful soils," says Richard, who has long lamented the ironing out of landscapes and subsequent loss of topsoil. "I said, 'if I ever got the opportunity to work myself with an owner on the same page, that's what I'll do'."

He found that opportunity at Pyramid Farm in 2019, when the Dawkins family decided to undertake a second vineyard development on their property.

The first 50-hectare block was developed in 2016 by Sileni, for whom Richard was working at the time.

When Chris asked the viticulturist to lead the family's own 44ha development, with little cultivation and no contouring, he jumped at the opportunity.

Richard walked (and walked and walked) the eight sheep paddocks, with 30 vertical metres from the top to the bottom, analysing slopes and aspects. The final vineyard layout - with eight blocks, ranging from 2.4ha to 9ha, each with different row orientations - was also designed with safe tractor routes in mind. When it came to the drains beneath them, Richard insisted Chris make the decisions, calling on the knowledge and instinct earned over a lifetime on this land.

The block was planted in August 2020, and two years on it's beautiful to behold, with rows cascading down hills and over terraces, while vines flourish in settled soils, ready for their first harvest next season.

Respecting the lay of the land is just one of the ways Richard and Chris are thinking outside the box, with blocks subdivided into 1.5 to 2ha "intensive grazing zones", using an Eco Trellis Post they designed alongside New Zealand Tube Mills, "allowing us to retrofit a permanent sheep fence", says Richard

That allows them to call on 1,500 breeding sheep for grazing and leaf plucking, section by section, future proofing for viticulture without herbicide, says Richard. "What we want to do is have a vineyard that's ready fora wine company, ahead of time." Subsurface irrigation means less water use, and also saves the infrastructure from damage from grazing. "Whilst the use of sheep is not as readily available to others as it is to us, what I will say is that we are trying to develop a vineyard to the strengths and resources we have at our disposal."

And demand for the fruit is abundant, partly because of the shortage of Marlborough Sauvignon Blanc and partly because wine companies are excited by the prospect of fruit harvested from different aspects, gradients and soil types, says Richard. But it's also because of the innovative ways the farm is future proofing for "nil herbicide" while taking care of its land, he says. "The more you talk to people about what you were doing, the more they like it."

Chris Dawkins has spend his lifetime building on the work of his father Jack, who bought the property in 1954 and set about rectifying its rundown state. The vineyard blocks all honour Jack's vision, with each named for one of his experiences in World War II, from Cassino to Abbassia.

Julia and their four children are equally passionate about the land and its soil, as well as the regenerated native bush flourishing along the Avon River, the native planting around dams, and the mixed species forestry covering 15% of the farm. Judges in the 2019 Cawthron Marlborough Environment Awards, where Pyramid Farm won the Supreme Award, commended the economically and environmentally viable operation, calling it a model for other farmers.

Chris and Richard are now pondering the potential of another block of grapes on Pyramid's river terraces, but that will be dependent on finding substitute grazing land for the sheep, says Richard, acknowledging that Chris is still more excited by ovine than vine. Fortunately, he's excited enough for the two of them, calling the work a privilege. "Seeing how well the vines perform in this environment and the positive way it is met by the consumer you definitely know that you're on the right track."

Causing a stir at The Wrekin

A young cow frolics in a paddock in the upper Brancott Valley, then gallops to the fence to see the treats in store.