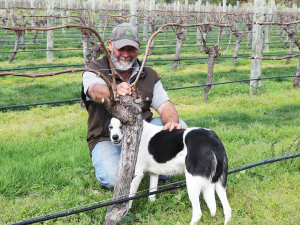 It is 19 years since Kerry Hammond completed his viticulture diploma, and in that time he has probably pruned tens of thousands of vines.

But never in his wildest dreams did he ever imagine that his skills with secateurs and vine canes would see him representing his country on the world stage.

Hammond will take part in the Felco World Pruning Competition, to be held in Switzerland early next year. It is not only a first for Hammond, it is also the first time New Zealand has had representation at the world champs in its 75-year history. He will be competing against pruners from close to 20 other countries.

The vineyard manager for Starborough Vineyards in the Awatere Valley, Hammond was at first reticent to enter the nationals held in Marlborough.

Not only because in his role as manager, he isn’t quite as hands on in terms of pruning as he used to be, but also because the competition was held five weeks after the vineyard pruning had been completed. “There was no way for me to practice in the weeks leading up,” he says. That will also be an issue heading to the World Champs, given they take place in March – during vintage, not pruning season.

Add to that the forms of pruning are different the world over, and Hammond knows he has some work ahead of him.

“There are some really different styles of pruning in Europe. For example, there is one style where they bring a cane straight down to the ground. They have bush vines with the goblet style where they are five spurs on a head, no wires, no posts. I’m not too sure what style I will have to prune, although I have been told it will likely be a single cane and spur pruning.”

Competition organiser Jeremy Hyland said eight competitors from around the South Island took part in the national competition held in August. And he has no doubt that Hammond will do well on the world stage.

“Kerry has a great understanding of both pruning systems. There were some people who were strong in one and not so strong in the other, but Kerry along with one other guy were solid on both spur and single cane.”

While he is appreciative that there are no vines to prune in Marlborough between now and the World Competition, Hyland says Hammond’s knowledge will make up for any last-minute practice.

“We purposely chose to add a theory component into our competition, so that meant the person who won had a thorough understanding of pruning and will be able to adapt to what is put in front of him. He will do New Zealand proud.”

Along with the title of New Zealand pruner of the year, Hammond was also awarded the Allan Coker Memorial Trophy, in memory of the man who had been involved in the Marlborough Silver Secateurs for many years.