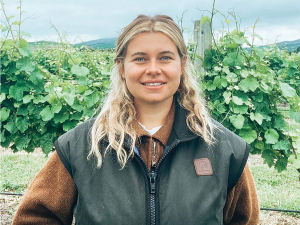 Georgia Mehlhopt has taken a unique pathway into the wine industry.

The law graduate was an emergency communicator until hiking the Camino de Santiago trail in Spain sent her in a new direction. These days, Georgia is working as a Viticultural Technician for Accolade Wines, but will start a cellar hand role for vintage at Greystone in March. "I'm very torn between the vineyard and winery, I love both aspects of it."

While studying, Georgia worked as a community law caseworker and as an emergency communicator for the New Zealand Police, receiving 111 calls. "It was heavy work, and mentally and emotionally draining," she says. After completing her degree and being admitted to the bar, she decided to travel and have a break.

Georgia found herself walking the 800-kilometre Camino de Santiago trail across Spain. The trail winds through the Rioja wine region, where she would often stop under the shade of the vines and talk to vineyard workers. Along with tasting the delicious wines from the region, it was these conversations that "sparked an interest" in a career in wine.

Before she returned to New Zealand, Georgia had already looked up the Lincoln University qualifications in her home town of Christchurch. "I found out I could do a one-year post-grad course, which was so tempting because it was only one year out of my life."

The course flew by, and she landed a job at Amisfield Vineyard in Central Otago by simply emailing them. She went to visit the winery to see if it would be a good fit and was offered a graduate trainee role right away.

Georgia says the team at Amisfield were fantastic. "I couldn't have asked for a better place to do my first vintage." She worked there for almost a year and got a taste of work across the vineyard, winery, and lab. "They were so supportive and forward thinking, and they pushed me to do more and to try the Young Winemaker and Young Viticulturist competitions."

The experience in both the vineyard and winery she gained from the trainee role has served her well, helping her move around the industry. "I initially thought I'd want to work in the vineyard more, but then I did my vintage at Amisfield and gravitated more towards the winery."

Although Georgia is keen to give northern hemisphere vintages a go when borders open, she is happy where she is now. "I'm pretty keen to get more involved in the New Zealand wine industry if I'm honest."

Her favourite thing about the industry is the people. "It sounds cheesy, but they are so supportive, and I've never been in an industry that's like it." She says everyone is willing to share their knowledge and want others to succeed. "It's very welcoming, to someone new to the industry who has a lot of questions."

Georgia encourages anyone who is curious about working in the wine industry to give it a go. "Reach out to wineries in your area and ask if you can talk to them to learn more about it." She says it's a great chance to hear from them and learn more. "Try a vintage and just go for it! What do you have to lose?"