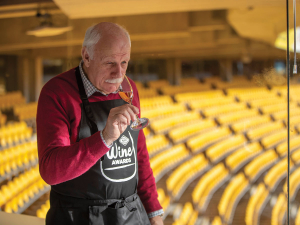 Jim Harre is the first to admit he keeps a low profile for someone with such a big influence on wine.

His decisions determine which wines will be widely enjoyed by drinkers in many corners of the world, even if his name remains firmly under the radar in his role as an international wine judge.

Things have moved fast for Harre but change has been slow in the judging culture.

“In my early experience in judging, the message was clear - keep my mouth shut, my ears open and don’t make a fuss.

“I thought that if ever there was a concept of judging that would turn someone off, that was it. The idea of inclusiveness for young palates was not part of the culture back then. At least the bullying has largely gone today, which I think is a very positive thing. I expect people to judge wines seriously but I also expect them to have fun – I believe you’ve got to create an environment that’s happy to be in and if you’re not having fun, you’re not judging particularly well.”

To say that wine was in the family is to make a major understatement about Harre’s early life. His brother, father and grandfather all made wine, so it wasn’t exactly a stretch that he would also become involved in the industry.

But despite the family’s passion for wine, Harre originally trained as a school teacher. He left teaching and fell into work as an international flight attendant, through an unexpected meeting with an old friend. He applied for a job at Air New Zealand in 1973, got the job and began training with Air New Zealand in 1974.

The work was enjoyable but he quickly tired of the substantial time off, so he began studying winemaking and viticulture at Hawke’s Bay Polytechnic and suggested a wine education course for cabin crew.

“Air New Zealand management thought it was a good idea and suggested that I organise and set it up, so I went to Bob Campbell, who initially set up and ran the wine training, which I later took over and was subsequently appointed a wine consultant for the airline.”

His career in wine has snowballed from there. As have his judging roles, both nationally and internationally. Trends in wine styles internationally have grown in tandem with his career.

There are significantly more wine competitions in the world today than there were when Harre first began and he has a significant role to play in a vast number of them.

He says winemaking in New Zealand is becoming better but that it is important not to develop a mindset of being ‘the best’ because the industry in this country is so relatively youthful compared to thousands of years of experience in traditional winemaking countries.

“I think we are seeing extraordinary wines coming through at lower prices. Pinot under $30 is very good now but 15 years ago it would have been undrinkable. This is a very good trend because it opens up these lovely wines to a wider range of consumers.”

One problem for New Zealand winemakers is a lack of diversity in consumer purchasing.

“I don’t think we are doing enough to tell consumers about the great wines we make, such as Albarino, which is relatively new. If we don’t communicate about wines like this, then we are in the situation of making great wines that are at risk of disappearing because there’s no market for them – because we haven’t made a market for them.”

The biggest problem we have in wine judging going forward, in his view, is

protocols in terms of how shows should be run

“We have largely switched to the 100-point scale so that competitions have media and marketing value overseas. What we don’t have is best practice so that we can trust the process behind it. There’s no reassurance that the system is a process that is robust, without compromise.”

He is encouraged to see a more diverse range of people coming into the wine judging process today.

“When I first started judging it was a mostly a group of doctors and scientists and then mainly winemakers. Now we are seeing a more diverse range of people coming into judging and we need more diversity in judging wine.”

Another issue that’s important to him is how wines taste outside of the judging context.

“I can tell people if a wine is good but I can’t tell if they’re going to like it. A wine competition is a snap shot of a wine at a certain place and time. People’s own preferences will always make the final judgement but one thing we do robustly is champion quality parameters. That can always stand up.”

As to what he has learnt from judging wine, Harre says it is a continuous journey.

“The main thing is that at the end of a competition, I enjoyed myself, learnt a lot and had a really pleasant time in that environment. I go into every competition thinking I’m going to learn something new - and I do.”

Seifried Estate’s 2019 Sauvignon Blanc is so laden with award stickers, it looks set to topple over.