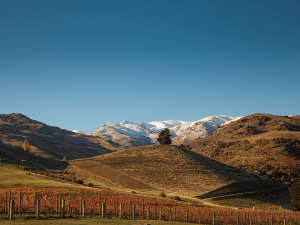 “It was warm to start, cool and wet in the middle, and hot and dry at the end.”

Pinot Noir yields were variable across the region, with inclement weather during flowering and set, driven by cold southwesterlies and rain, says the viticulturist , who works with blocks around the province. That weather affected some subregions more than others, with Gibbston and Bendigo doing particularly well, and Bannockburn and Alexandra taking the biggest hit, followed by Pisa and Cromwell. “We have a block in Bannockburn that we target at 5 (tonnes per hectare) and we got 2.5 tonnes. In Bendigo we target 6 tonnes and got 7.5.”

Meanwhile, white varieties were consistently heavy across the region, he says. “It’s just the Pinot, that fickle and temperamental mistress of a grapevine, which really suffered.” James says there was a “ridiculously dry and hot back end,” to the season, and Otago has declared a drought situation. The season began with about 100mm of rain at the beginning of January “and then virtually no rain until the end of harvest”. That meant very low botrytis and, with little wind, there was also very little pressure from powdery mildew, making it a “dream run” in terms of harvesting with ease.

The hot spell at the start of ripening included warm nights, which ripened fruit quickly, but the brakes were applied when autumn’s diurnal temperatures kicked in. The long slow ripening process that followed helped the region get through severe labour shortages, says James. Certain tasks were still compromised to get through the season, and the lack of skilled Recognised Seasonal Employer (RSE) scheme staff exacerbated the challenges of the season, “but we managed it by hook and by crook”, he says.

And the quality of the fruit is “outstanding”, he adds. “Low yields and good quality is a well worn trope, but it certainly applied this year, we are very happy with what we are seeing in tank.”