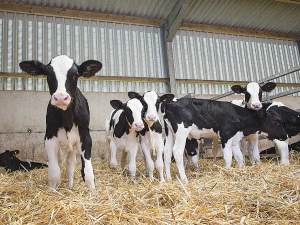 Strong parasite coverage in weaned calves just isn’t an area that is given a huge amount of thought at this time of year.

“This combination helps provide protection during the vulnerable period after calves come off coccidiostat-treated meal onto pasture while supporting the development of their natural immunity to coccidiosis,” says Alleva general manager Blair Loveridge.

He says on many farms the mad rush of calving is winding down for the year. However, mating is about to start and spring cropping is rolling out across the country.

“Strong parasite coverage in weaned calves just isn’t an area that is given a huge amount of thought at this time of year.

“Due to stress and undeveloped immunity during the weaning transition, calves are very susceptible to parasitism from both gastrointestinal parasites and coccidiosis. The result can have an impact on growth rates during this time while the calf’s immunity to coccidia infection is developing.”

Loveridge says its Turbo Initial formula is stage one of the three-stage drench programme designed by Alleva specifically for growing cattle.

“We’ve listened to the market and worked with vets to iron out as many pain points of cattle drench options in New Zealand as we can.

“The result is really exciting and a huge leap forward in terms of efficacy and safety in cattle drenches,” says Loveridge.

The second product in the range is also an oral drench named Turbo Advance. This targets cattle in that second stage of growth, where coccidiosis immunity has developed and they are still a safe size to drench orally.

It can also be used on cattle under 120kg, which is often not an option with many other drench combinations, allowing for variations in growth rates within mobs. Turbo Pour-on and Injection are alternate treatments for the third stage of growth, suitable for cattle that are too large for an oral drench.

The product is available exclusively through veterinary practices nationwide and is recommended as the first drench for weaned young stock.

The calving season on the West Coast is progressing well with the help of good weather, says retired Federated Farmers president Katie Milne.