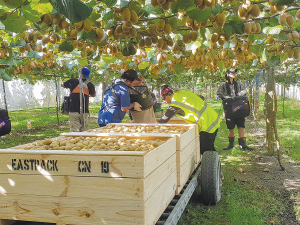 Summerfruit NZ say that while weather has caused this season's crop to take a beating, they say they're thankful for the help they've received this season.

Although the full extent of the damage is yet to be quantified, it is expected that up to 50% of the season’s bumper cherry crop has been lost due to splitting, resulting in the loss of $50 million in export revenue to the country.

Additionally, flooding caused damage to orchard buildings located around Earnscleugh when the Fraser River broke its banks. The impact of the weather event isn’t confined to just this season as damage to trees will potentially affect next season’s crop.

The news comes at a point when growers were starting to feel optimistic that most of their fruit would be picked thanks to the fantastic response from New Zealanders and stranded backpackers helping with the harvest.

While summerfruit growers are aware of the role weather plays in their livelihoods and make preparations to mitigate it, the persistent and heavy nature of the rainfall had not been experienced in 40 years.

“It is incredibly sad to see growers lose so much of their crop in this way,” says Summerfruit NZ chief executive Richard Palmer.

“Growers are working hard to harvest the remainder of the crop, and with good weather ahead there is still substantial work for pickers and packers,” Palmer adds.

“We also feel for all the people who came to help with the harvest as they responded so generously to the industry’s call for help.”

Palmer says that damage to other summerfruit crops provides ongoing opportunity for some harvest staff.

“We are working hard to assess what the impact will be on both orchards and the workers, and are looking at how we can keep people in work for the summerfruit harvest followed by apple, grape and pear harvests.”

Summerfruit NZ says the industry is also grateful for support provided by the Ministry of Transport to ensure flights to export markets were maintained despite the ongoing rain and uncertainty.