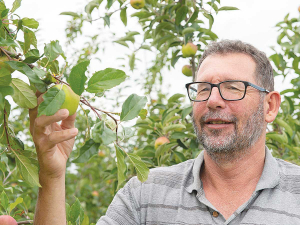 Dr Richard Volz says the outcome of the NZ/Spanish apple research project has been a tremendous achievement.

But as Peter Burke reports this was actually a by-product of their original research project.

Twenty years ago, a group of plant breeders from Hawkes Bay met with researchers from the Institute of Agrifood Research and Technology (IRTA) in Catalonia in Spain to discuss the possibility of breeding a variety of apple that would thrive in hot summer climates such as Spain.

Fast forward two decades and their efforts have come to fruition with the release of the first apple from years of research and development.

Dr Richard Volz, who now heads the project in NZ, says the outcome is a tremendous achievement. He has spent more than four decades working on various scientific projects relating to apples and pears – including work on production and post-harvest – before becoming involved in genetics and plant breeding.

“It was pretty obvious to my predecessor when he visited Spain in the early 2000s that the varieties of apples and pears that were growing there weren’t very well adapted to the hot growing conditions,” Voltz told Hort News.

“The Spanish researchers came to NZ and eventually an agreement was signed between the two organisations and the plant breeding programme began.”

The idea was to breed a new apple variety that would thrive in hot summer climates by selecting the best plant material from both Spain and NZ.

Voltz says NZ’s contribution has been to select NZ selections and cultivars that might perform well as parents and carry out crosses amongst them in NZ. The seed from these crosses were sent to scientists at IRTA in Spain, where they grew out the seedlings in their hot climate conditions and selected the best based on fruit quality and productivity. Some crosses were also carried out in Spain using pollen from NZ apples onto commercial cultivars.

“So not only did we do the crossings here. We helped them establish the breeding up there because they didn’t have any breeding personnel who specialised in apples and pears,” Voltz adds.

“We set up strategies and systems to allow for the production of the new variety to occur as quickly as possible. We also trained their staff and this is still ongoing,” he says.

The new hot climate apple is now being grown in Catalonia and, according to Volz, looks very promising. He says it’s a fully red apple, is very sweet and has a unique texture, which he says is moderately firm but very crisp.

“It’s a very juicy apple which is very unusual in such a hot climate – normally we tend to find them a little bit dry. It has very good storage ability, which is pretty critical for a modern apple that has to be shipped to export markets as well as being sold domestically.”

Volz says it appears that the collaboration between Spain and NZ is quite unique in that it involves apple breeders from hot and temperate – or cooler – climates working together to develop new cultivars.

He adds that in the past, NZ has collaborated with breeders in France, the USA and UK – all of which have similar climates to NZ.

The benefits for NZ

Dr Richard Volz agrees that as well as being the first apple bred for hot climates it has unintentionally become an apple for the age of climate change.

He says plantings of the new apple in NZ are a number of years away due to plant import pathways. NZ-based T&G Global has been appointed as the commercialisation partner for new varieties coming out of the   programme. Volz says there are also other factors, such as the new apple variety passing strict quarantine requirements to ensure that it does not bring any unwanted pests and diseases into NZ.

But he believes the advent of an apple that will grow well in hot climates is a benefit to NZ, and other growers will be interested in the performance of this apple.

Volz adds that further trials are being undertaken to prove the apple will adapt to NZ’s cool climate conditions.

Now is the time for you to set yourself up for a career in horticulture, explains Peter Kemp, Head of…