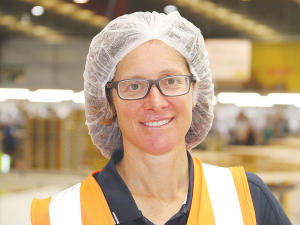 Sustainability is a word much bandied about. It means different things to different people or organisations. One company that has a clear definition of sustainability, and a very active programme to put actions beside words, is Trevelyan's packhouse at Te Puke, in the Bay of Plenty. Peter Burke went along to see what they are doing.

Sarah Lei is Trevelyan's sustainability manager at its packhouse.

It’s the largest, singlesite kiwifruit and avocado packhouse in New Zealand, family-owned and is currently managed by James Trevelyan. It employs about 200 people on a permanent basis, but at the height of the harvest this number swells to more than 1,500.

It’s a busy place when the kiwifruit harvest is in full swing, with fruit coming in from orchards around the district to be graded and packed into trays for export. Conveyor belts loaded with fruit move rapidly from station to station and technology plays a huge role in the process.

But in Trevelyan’s case, it’s more than just packing trays, it’s the philosophy of sustainability that creates a difference. Lei says the pillars of economic, environment and social sustainability are key to this.

“Economic is about continuous improvement and working smarter,” she told Hort News. “It’s all very well to be ecofriendly but if you haven’t got a viable business, it doesn’t go so well.

Lei says they have systems that encourage staff to come up with ideas that make the business sustainable. At the beginning of every shift, staff meet briefly to review what is planned and their comments are welcomed. There are meetings at all levels of the organisations and good ideas are implemented.

All staff entering the packhouse have to wash their hands, which initially was using a lot of water. A staff member came up with an idea and actually made the physical changes to the washing facilities, which reduced water consumption in that area by 85%.

“This is an example of someone having an idea and seeing it through,” Lei says.

The advent of Covid-19 saw Trevelyan’s packhouse change forever. James Trevelyan quickly connected with packhouse operators in Italy, which had already experienced Covid, and he adopted many of their systems – such as the plastic screens that separate staff. The company also erected a large marquee next to the staff canteen to allow for social distancing.

“The marquee is still there and while it’s not being used much at present, we would need it if Covid levels suddenly changed,” Lei told Hort News. “Before, we used to start the shifts at the same time, but now we offset the shift slightly so not everyone is arriving and leaving at the same time.”

She says this worked well during Covid and they have carried it on because it makes sense in terms of car parking and eating in the canteen.

Agility and being able to respond quickly – be it to new local rules or international requirements – is now a part of the new business as usual.

“We have to be an adaptive organisation that can move in any direction,” Lei adds.

Continuous improvement is inextricably linked to continuous communication – that is the challenge for Lei and management at Trevelyan’s.

She says it’s about staying calm and rational, and explaining to people why things have to be done in a certain way. In any organisation there are those who are quick to adapt to change and others who are less receptive to doing things differently. But Lei acknowledges that with Covid, people accept the inevitability of change.

“It’s about having good frameworks and being relentless, and sometimes accepting a smaller degree of change than one might have hoped for,” she says.

Good environmental practice is key and the company has a comprehensive recycling programme. It is also looking to reduce its carbon footprint and focus on biodiversity.

Lei says because Trevelyan’s is a family business, it has a strong focus on people. The various continuous improvement programmes are aimed at making people feel valued. Ideas from whatever level of the organisation get recognised by management.

“We survey people who apply to work here and we ask ‘why’ – and they say, ‘because I have got friends and family who work here and enjoy it’ – so that’s the greatest reference,” she says.

Agri sustainability into the future

Q: What does sustainability mean?

Dairy Woman of the Year for 2019, Trish Rankin, says sustainable practices and picking the best team have helped her become a better farmer.

The time is right for a bottle reuse programme in New Zealand’s wine industry, says Green Bottle Project director Neil Pollett, who plans to have a machine in the country by the end of the year.

Denis Marshall has worn plenty of hats throughout his working life, but his plea to the wine industry has required a one-size-fits-all.