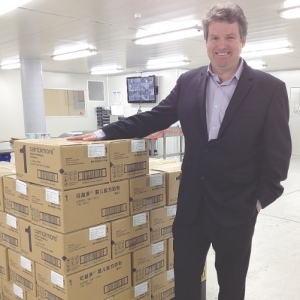 HIGH PROFILE media coverage is needed in China to get the message out that infant formula products are safe, says Chris Claridge from the NZ Infant Formula Exporters Association.

The New Zealand Government needs to take the lead and Prime Minister John Key should visit soon, with industry people, he says.

Claridge is highly frustrated that he cannot seem to get his message heard in New Zealand: our products are still at high risk because the Chinese consumer still thinks New Zealand infant formula is poisoned.

Claridge made the comments to Rural News from a mother-and-baby store in Guangzhou province where he was hearing first-hand the concerns that remain about New Zealand products. He had met with 50 retailers the night before.

Carrickmore Nutrition, of which Claridge is managing director, faces a loss on sales of at least 30% over the next three months.

“What is clear is all New Zealand brands are affected. The subtlety of Fonterra, wpc, botulism is completely lost on the Chinese. All they hear is New Zealand, infant formula poison.

“I don’t know how I communicate back to New Zealand – I have been trying – this affects our ability to sell in China.”

In New Zealand everyone understands it was a false alarm, but not so in China. “All they hear is our infant formula is contaminated. The distributors and the retailers are starting to understand it was all a false positive, but the consumers have not heard that message.

“It is the same story – bad news gets publicity, good news doesn’t. We need the Government to take the lead in China and get media coverage that our infant formula is safe.”

The offer from John Key to visit China should go ahead.  But it needs to have industry people involved otherwise it just becomes a general discussion about New Zealand; it has to specific about products and infant formula.

Claridge says the issues of product being unduly held up at Chinese ports seem to have resolved itself. “The issue here is to keep selling. The main purpose of my trip to China is to assure our distributors and retailers that our product is safe and it isn’t contaminated.

“Meanwhile all the other international brands – France and Australia – are busy trying to capture this market.  On September 23 a French label in association with the French Government are flying 20 or 30 journalists from Shanghai specifically to show them their infant formula industry.”

Claridge asks, “Does New Zealand understand what its lack of coordination and coherent approach means? It means our capacity to sell is reduced. Sure we can sell bulk powders to the market but our ability to sell added value retail products in this market is at high risk.

“China is a huge place: just because we publish a few articles in the New Zealand media that it was a false positive, does everything get changed to normal? The answer is ‘no’. That message is not out in the media in China.”

Wine and the Chinese tourist

As Chinese tourists flock to our shores, the New Zealand wine industry could help enhance their visits by catering more specifically to their needs and tastes, Lincoln University research suggests.

Head office with a difference

THe head office of Carrickmore Nutrition is indistinguishable from the other houses in Pateke Way, Parapapaumu, on the Kapiti Coast.

A New Zealand exporter of infant formula to China says there is no overall integrated ‘New Zealand Inc’ plan for that country.