New orchard a vote of faith in sector 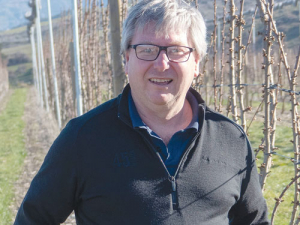 A new 12ha cherry orchard now being set up by Cromwell’s 45 South is a vote of confidence in the future of Central Otago’s cherry industry.

45 South owns or manages at least 150ha of cherry orchards in the Cromwell area, producing 30-40% of New Zealand’s export cherries.

Now it is planting a new 12ha block on the slopes above Lowburn on Lake Dunstan.

General manager Tim Jones, who is also the Summerfruit NZ board chairman, says the industry is expanding hugely, particularly in Central Otago.

The district already has 850ha of cherries and Jones expects that to double in the next three years with new investment coming in and orchards being planted.

Wearing his Summerfruit NZ hat, however, Jones acknowledges that the industry has questions it must ask itself.

“You can’t rent a house in Cromwell now, so if we need to double the number of staff where are the seasonal workers going to come from?

“All those sorts of things need asking, let alone is the market big enough to handle it?

“As much as I think it’s great to see the industry expand, I just hope it’s happening sensibly, and people have done their due diligence to be market-led.”

“But whether we can rely on them to take double the amount of fruit in five years, I’m not sure,” says Jones.

The biggest competitor is Chile, which is planting about 2000ha a year and comes into the market at the same time as NZ and at a much lower cost of production.

Jones says NZ serves the high-end gift market as its point of difference.

“Is that high-end gift market enough to double or triple the amount that’s coming out of this country?”

“It’s quite a niche market and you pack it in what the consumer is looking for.  Ten years ago, we packed all our cherries in 5kg boxes; it was easy.

“Now it’s down to 400g and 1kg boxes, so we’ve got big volumes having to go into really small vessels.”

The cherries are all chilled and packaged locally, to satisfy the Chinese demand for food safety.

“Consumers need to know the fruit is the real thing and hasn’t been tampered with or substituted along the supply chain.”

Jones says the Chinese consumer is happy to pay a premium “if they’ve got the right quality, the right size, and the right flavour”.

Cherry on top for station’s returns

New apricot’s a ‘shot in the arm’

The New Zealand apricot industry is hoping for a shot in the arm from new varieties soon to enter production.