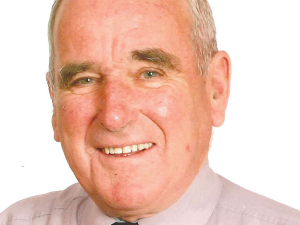 A third-generation farmer, Annett was to own and run three different properties around South Canterbury in his 35-year farming career. However, on ‘retiring’ in 1981 he took on a part-time role as field representative with the fledgling South Island Export Barley Society.

A year later, the newly named South Island Barley Society appointed Annett as its fulltime role as field officer for South Canterbury and North Otago. The society continued to expand, changing its name to Farmlands Grain NZ Society, and moving into the co-operative marketing of wheat and oil seed rape.

Another name change – to Cropmark NZ Society – saw Annett appointed as regional controller and the business expanded into additional crops including field peas, turf ryegrasses, fescues, borage and others.

After 10 years with the company, Annett left and in February 1991, with the encouragement of arable farmers in South Canterbury he, along with wife Nancy and daughter Chris, started Alan Annett Ltd, Grain and Seed Merchant business.

The idea was for the business to be a low-key operation; trading in grains and peas to flour mills as well as pig and poultry farmers; and exporting peas and lentils to Asia.

However, by the late 1990s the business had grown rapidly into barley exporting, agrichemical sales and retail pasture seed. The growth of the ‘low-key’ business saw it move from the Annetts’ Timaru home to premises on State Highway 1 at St Andrews and expanding its farmer base throughout Canterbury, Otago and Southland.

When the Government deregulated the wheat industry in 1987 and stopped the ban on NZ exporting grain in foreign-flagged vessels, Alan was able to use that as an opportunity to significantly lift the price of barley for farmers in the mid-90s. At the time, there was a surplus in the market and any product that could be moved was at a very low price.

He lobbied farmers, put together a cargo and did a deal with Australian-based buyer, Joseph and Company Ltd. There was quite the celebration on the day in January 1995 at the Port, as this was the first time a foreign-flagged vessel had left the Port of Timaru.

Helping to mark the occasion was Southland MP – and later to become Prime Minister of NZ – Bill English, along with his brother Conor, who became chief executive of the Federated Farmers.

Annett was very proud of this deal, which lifted the price farmers received for their barley to $200 a tonne – when the world price was only $120 a tonne.

He was even more proud that he managed to convince the bank manager to advance him enough money to to pay all the farmers early, on Christmas Eve, before the ship had even sailed!

While freighting fertiliser for clients from SouthFert (later to become part of the Ballance Co-op) in Southland up to Canterbury to make the price viable, Annett saw an opportunity for back loads. He contacted Harraways in Dunedin and the Mainland Poultry farm in Waikouaiti to see if he could supply them with grain in the trucks that were going down south empty, to pick up fertiliser. This was the start of a long and special relationship he had with these companies. In fact, right up until he went into care, Alan could be seen at his local supermarket shifting the Harraways products to the front of the shelves and relegating the Australian-owned competitor’s product to the back of the shelves!

In 2002, Alan and Nancy retired from the business (now having had its name changed to Annett Grain & seed Ltd). However, not before he’d helped to establish another company, Plant Research NZ Ltd – with the support of Mid-Canterbury Grain & Seed Merchants (Midlands Seed Ltd and Cates Grain & Seed) and also Adrian Russell, a plant breeder from Crop & Food Research. At that time, the company concentrated on developing new cultivars for the grain farming and milling industries.