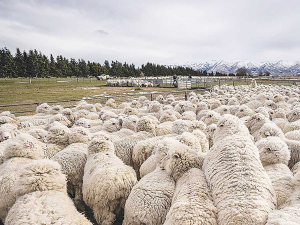 The average sheep farmer is in their late 50s and the labour-intensive task of drenching lambs becomes more physically demanding with each passing year.

However, a new spot-on product called Scorpius Elite is hitting the market that is claimed will save farmers both time and physical effort.

“Back in 2010 when the idea sparked, a farming friend had worked out orally drenching his lambs was equivalent to an extra labour unit over summer on his farm,” says Donaghys managing director, Jeremy Silva. “He made the comment that there had to be a better way to protect his lambs from parasites and I took it back to our lab.

“We discussed ideas with our formulation scientists and other farmers facing similar issues, working out what was achievable, and that kicked off the development project for Scorpius Elite.”

Silva says the objective was to find an easy and effective way to treat lambs for internal parasites while reducing the chances of developing drench resistance, which meant it needed to be a combination product.

“We chose the skin-level spot-on method for the application; we knew it couldn’t be a pour on as thick layers of wool could form a barrier preventing absorption of active ingredients,” he explains.

“And between the shoulder blades made sense as it’s easily accessible while sheep are standing and a good target for consistency of application.”

The product uses a normal oral drench gun nozzle to penetrate the wool so doesn’t require any new equipment to use it.

The active ingredients are eprinomectin and levamisole. Eprinomectin is a macrocyclic lactone and hasn’t been used in sheep in New Zealand before. However, Silva says extensive trial work showed its efficacy and it’s found in many pour-ons, injections and oral drenches for cattle. Levamisole has been used widely in sheep and cattle in New Zealand in oral, injectable and pour-on formulations for over 40 years.

The Donaghys team tried several different formulations to help overcome the unique challenges from the wool-covered skin of sheep. They were keen to find a way to facilitate both active ingredients penetrating the skin while not harming the skin or wool and keeping the active ingredients stable to maintain an acceptable shelf life.

Silva says results from the field trials exceeded expectations, the spot-on formulation performed better than expected, even outperforming the triple oral drenches they had hoped to match.

“We did an early study on a farm in the Hawke’s Bay that had a variety of parasite species with severe levamisole resistance and Scorpius Elite had 100% efficacy.

“This efficacy wasn’t just due to the addition of eprinomectin, a test spot-on application with levamisole only was more effective than an oral levamisole – the spot-on improved efficacy,” Silva says.

It was also successfully tested in a variety of wool lengths in crossbred sheep.

He says the product has a short meat withholding period of sixteen days, making it ideal for use in young, rapidly growing lambs, being regularly drafted for slaughter.