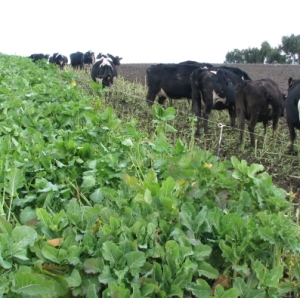 What will you be feeding your sheep or cattle come winter 2016?

While it might seem premature to be asking that question even before we’re into winter 2015, if you’re planning to grow feed crops next season the preparation starts now, a recent Beef + Lamb field day in South Canterbury heard.

“At this time of year you need to sit down and decide ‘what’s my plan; what’s my crop, what’s my paddock history, what’s the chemical history’,” Seed Force agronomist David Walsh told the ‘Fodder Beet – Your Questions Answered’ event at Pleasant Point.

While brassica such as kale or forage rape could provide an ideal entry for fodder beet, herbicide residues from the likes of T-Max (aminopyralid) used in or prior to the brassica could kill emerging beet, he warned.

That was echoed by local agronomist Steve Bethell who added that residues of Harmony, Granstar and Pysus can also cause problems, as can atrazine used on maize “particularly following a dry year like this one”. “You’ve got to be looking 12 to 24 months out,” he stressed.

Walsh noted how people are commenting on how well fodder beet has coped with the dry, but warned it should not be considered “drought tolerant” and that “it would be a big mistake to think you can grow fodder beet anywhere”.

Paddock preparation is key and a fallow – chemical or cultivated – to build soil moisture prior to drilling and ease pressure on subsequent herbicides has paid dividends this year. “It allows you to spray out weeds cheaply with Roundup before you sow.”

While herbicide bills for the crop can top $1000/ha, in a few cases clean crops had been achieved with as little as one pass with 0.5L/ha of Versatil (clopyralid), he noted.

Knowing the paddock’s history is also important in determining nitrogen fertiliser need of beet, said Walsh. Crops established where long-term pasture has been sprayed out well before planting were unlikely to need a great deal but where paddocks had been repeatedly cropped, soil reserves would likely be low so good yield responses could be achieved.

As for responses to potash, trial results have been variable – some high and some low. More research is being done by the fertiliser cooperatives and Plant and Food Research so hopefully more definite guidelines would be possible soon.

Wintering practices have changed on Robert Young's Southland farm over the past 10 years.