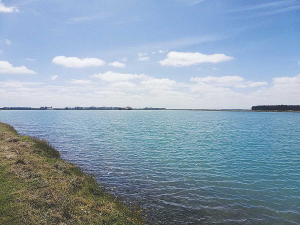 Planting around the edge of the irrigation lake is a part of a long-term biodiversity vision for the farm.

The 612-hectare farm includes the largest remaining kanuka stand in North Canterbury. Due to its important biodiversity values this area is being protected by farm managers Richard and Susan Pearse.

Richard Pearse says the kanuka stand provides an important seed source and seedlings have been taken from the area to try and recreate a similar ecosystem in other dryland areas. He is aiming to plant approximately 1000 native trees per year throughout the entire farm.

“It’s important for us to protect this area as there are hardly any of these dryland areas left. It is easier to protect what you already have on farm than starting from scratch.”

The event which was hosted by Environment Canterbury cultural land management and biodiversity advisors Makarini Rupene and Zipporah Ploeg, who provided a practical insight into changes landowners can make to protect special areas on their farms.

Ploeg says while dryland ecosystems may not look as visually appealing as wetlands or stream planting, they serve a vital purpose for preserving indigenous biodiversity.

“Kanuka stands and other dryland ecosystems play an important role in the land corridor from the mountains to the sea. Once you look closer you can see a thriving ecosystem of moss, herb fields, orchids, lizards, and mycorrhizal fungi. The fungi interact with the roots of the kanuka trees and help increase water and nutrients, while the trees provide the fungus with carbohydrates from photosynthesis.”

Farmers attending the event learned that mahinga kai encompasses much than just food gathering and waterways. Rupene described the concept as the connections between resources and places.

“Mahinga kai relates to every natural resource and the places these are found. It’s about the connections between the two and looks at the land and water as a much broader network than just what you find on one piece of land.”

The Pearses have always been passionate about enhancing the biodiversity values of the farm and believe that the key to environmental improvement is having a plan and tackling the simple changes first.

“You can’t do everything at once but if you have a long-term vision and break it down into smaller steps, you’ll make progress.

“We have focused on the low-hanging fruit first and are leaving the larger projects for further down the track.”

The couple are trialling different options, including tree lucerne for fence line plantings along an irrigated stretch of land.

“It’s late flowering so it’s good for attracting bees. It’s also safe for stock so the cows can graze it.  We’ve got some seeds germinating now and we’ll wait until they’ve grown to a decent height before we plant them.”

They are also working on enhancing the land surrounding the effluent ponds. They have started preparation work and hope to plant around the edge of the ponds later this year.

“In this area we knew we needed plants with a high water tolerance. We have made a start by spraying out the grass and weeds, laying bark chip, and the next step is to add flaxes and hebes which we’ll source from local plant nurseries to make sure they suit our soil and conditions.”

Another area which the couple will work on in the future is planting the edge of their irrigation pond. Having a biodiversity plan has helped them to prioritise their enhancement projects.

“We’ve taken a practical approach. We can’t do it all at once, but we have our plan in place and we are working towards it. The key is to not feel like you have to do everything at once but to start small and make progress towards improving the environment.”

Environment Canterbury provides advice and in some cases funding to assist farmers to protect biodiversity and mahinga kai.

Apples delivered with a side of biodiversity

Most people might assume organic growing methods are better for biodiversity, but a new study by Plant & Food Research scientists shows a different approach can work just as well.