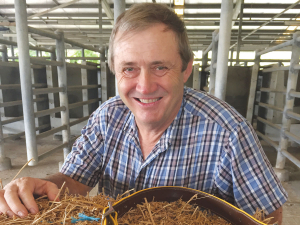 This follows research findings from an international team – including researchers from Lincoln University and CQ University in Central Queensland.

Results from the study means that, in the future, farmers will be able to act quickly and move sheep to new pastures when they begin to display the signs of (grass) staggers – potentially improving their bottom line by $100 per hectare.

Grass stagger is caused by the consumption of plants such as phalaris and ryegrass – common in both Australia and New Zealand – that
are infected with toxic strains of endophyte. It can be fatal if animals have experienced prolonged exposure to toxic pasture.

Toxic strains of endophytes can also be present in tall fescue, which is a common forage in the eastern and Midwestern United States.

The pair also worked with researchers from Lincoln University in monitoring the behaviours of sheep grazing perennial ryegrass using accelerometers and GPS devices.

“Visual monitoring or periodic testing for staggers is time consuming and labour intensive, especially when sheep are kept in large groups or in extensively grazed pastures,” Trotter explains.  “However, on-animal sensors can remotely monitor and detect changes in animal behaviour, so that when certain behaviours are exhibited they can determine if an animal is ill.” He adds that the emergence of smart-tags for real-time monitoring of livestock may allow farmers to respond more rapidly when animals become ill.

“Previous economic modelling has suggested that the value to the sheep industry of being alerted to staggers and then being able to quickly manage it would be worth over $100 per hectare in additional income.”

Machine learning analysis of accelerometer data showed that the activity of sheep that suffered staggers was increased in the morning and midday towards the end of the trial.

The study was conducted at Lincoln, where sheep fitted with collars containing accelerometers and GPS tracking devices were grazed on ryegrass for 17 days in autumn.

Bailey says the GPS devices tracked animals at 3-minute intervals and the accelerometers recorded movements at 12 times per second.

“Although more research is needed, the combination of machine learning and real-time monitoring of sheep behaviour with accelerometers and GPS has potential to detect when endophyte toxin levels affect their well-being (ryegrass staggers) and the animals should be moved to a different pasture,” Bailey concludes.