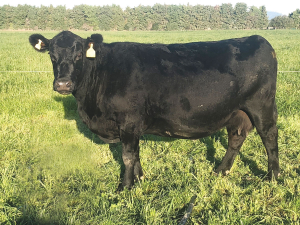 Meadowslea Stud Angus, at Fairlie, says its third annual production cow sale saw solid demand from stud and commercial buyers at its onfarm sale on May 1.

The annual draft, 10-year-old cows led the sale prices, with the top two old cows making $5000 each. Both sold to Piko-Burn Angus of Tuatapere. The young R2 stud heifers also sold strongly with a top price of $3300 to Wether Hills Angus of Dipton.

Meanwhile, 40 heifers on offer made an average of $2300.  All 93 stud females sold for an average of $2200, with 25 selling for stud transfer and the balance to commercial herds.

Stud principal David Giddings said the sale was an endorsement of Meadowslea’s focus on fertility and maternal traits that drive all the profitability in any beef herd.

“The 10-year-old cows have proven they are the right type of cattle for the hill country environment by producing a good, early calf every year and staying in good condition through droughts, snowstorms and everything nature can throw at them.

“These old cows that have lasted the distance were all medium framed and deep bodied with only moderate growth figures, but all very strong in rib fat covers. Clearly, this is nature showing us what is the right balance of figures for this environment.”

He says Meadowslea has focussed on breeding hill country cattle that will thrive and perform in adverse conditions.

“We’ve selected for strong rib fat covers and have proven that these animals handle the harsh conditions much easier and produce at higher levels in a sustainable way.”

Giddings claims selection over the last 25 years for easy doing cattle has led the stud in a different direction from most other Angus studs in Australasia and resulted in Meadowslea having some of the highest rib fat EBVs in the breed.

“Now science has recognised there is a direct link between increased rib fat covers and better fertility in heifers and cows. This coupled with daughters of bulls that have bigger scrotal size results in heifers reaching puberty earlier and rebreeding earlier over their entire lifetime.”

Meadowslea Angus has its annual bull sale on Friday June 21 and ‘Bull Walk’ open day on Tuesday May 21. Both events are being held on-farm, State Highway 8, Fairlie.

New ear tags for dairy stock will sort out genuine Angus dairy cross cattle from all the rest, say its promoters.

Higher-value bobbies are more money in the bank

Getting a premium on calves he would otherwise send away on the bobby calf truck is a seasonal bonus enjoyed by Waikato share-milker Markus Ruegger, according to Firstlight Wagyu.

An international celebration of the Angus cattle breed is coming to New Zealand, exactly 150 years after Angus farming was introduced to our shores.

The pies have it