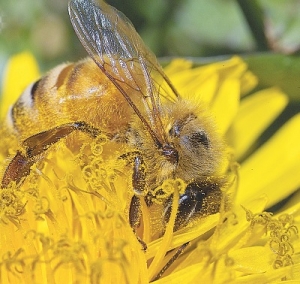 He told Rural News drought limits bees’ ability to collect nectar; this is now evident in the South Island, the clover crop being well down on previous years.

“That was simply a reflection of a very cold spring and a rapid change to an almost totally dry environment that’s been rolling on ever since. Without moisture we don’t get the flowers and, in particular with clover, it won’t yield any nectar and the bees go hungry. It’s not a great position.”

Moving into autumn, bees have a critical need for good pollen for next year; that’s the other challenge beekeepers face: normally there are yellow flowers available such as gorse, but it’s too dry and such flowers have not been there for bees, Hartnell says.

Bees need water and, because their normal sources are dry, they will seek it at animal drinking troughs. But troughs are a hazard.

“At a trough the bees look for something to land on so they can drink. But often they don’t find a stable place and because they can’t swim they drown. We have bee losses with them trying to access water.”

Hartnell says every year is a challenge for the honey bee. “In the spring they need good pollen to build the hives up and then they need the nectar flow to come in at the right time. This year, particularly in the South Island, that didn’t happen.

“In the North Island it was slightly different. The Waikato has had a great flowering of white clover and a lot of bees have done relatively well in those areas, but it’s spasmodic in the other regions, especially on the east coast of the South Island.”