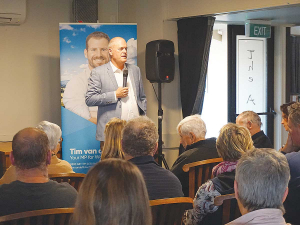 With the submissions period for proposed water reforms ending last week, the National Party was out and about in the Waikato dairy heartland putting its spin on things.

Muller claimed the Government is painting agriculture as a sunset industry despite it being New Zealand’s biggest export earner.

On water quality, Muller said National and the rural populace accept some rivers are under stress. But he said research shows 33% of rivers are much improved.

“Labour’s framing of its speeches on water issues leaves a lot to be desired, with talk of a catastrophe coming and the current state of rivers going to hell in a handcart,” said Muller.

He said the Government is using a select group of scientists to deliver a message without consideration of the economic effect and that it fails to engage the whole population of NZ.

“This is despite the fact that during high rainfall Auckland beaches have to be closed because of sewage contamination, and that the fire at Sky City dumped millions of litres of contaminated water into Auckland harbour.”

Muller discussed how farmers and landowners should frame their responses to the proposed changes.

He said the attendance and sentiment at recent farmer meetings had put immense pressure on the rule makers in Wellington and people should be “bending the ears” of their local MPs.

He reminded the audience that most NZ First MPs are in Parliament because of National voters’ choice over Labour.

“Farmers and landowners need to be more vocal and not just rely on producer organisations such as Federated Farmers, Beef + Lamb or Dairy NZ to take their message to the general public,” he said.

This point was reinforced by local dairy farmer and businesswoman Rebecca Walling.

“I was shocked by Winston Peters suggesting that water issues for farmers were of their own making,” she told the meeting. “We have to get together and engage the general public using all forms of social media available to us.”

Muller said Labour is not on the right side of science, but agreed that there is a need for improved freshwater management.

“But it needs to happen over time, using greater consultation with farmers and landowners to achieve the agreed results. We don’t believe a big stick will solve the problem because farmers need to be able to farm.”

He said the current proposals don’t consider the cost to farming and that adding costs would disadvantage NZ producers against overseas competitors.

The meeting was attended by mostly rural folk -- no one under 40 -- and it was obvious that the age-old topic of urban-rural divergence is still a major issue. Urban dwellers were said to be still unaware of the problems in their own back yard and to have no shared experience of water and climate issues.