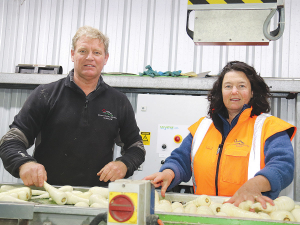 They supply sprouts to all Countdown supermarkets in the North Island, and other retailers, with these vegetables. They are also a significant grower of parsnips and supply directly to My Food Bag.

Bruce (BAgComm) and Stephanie (BAgSc) are both graduates of Lincoln University. Bruce first worked in the tourism sector and Stephanie as a fertiliser and agronomy rep around Ohakune.

Both come from farms: Bruce from a South Canterbury arable property and Stephanie a Hawkes Bay sheep and beef farm. Their farming backgrounds brought them back to the land to ensure their children were raised on a farm.

The Rollinsons have farmed their present property for 19 years and witnessed many changes including new environmental regulations.

They say the changes in consumer demand have shaped their business, notably the expectation that food is produced sustainably, says Bruce.

They operate under NZ GAP (good agricultural practice), a Government approved quality programme under which they are independently audited by Asure Quality. He says they also get random checks on their chemical applications to ensure they are meeting withholding periods and residuals.

The crop itself has changed a lot because of consumer wants, Bruce told Hort News. Essentially they want smaller, gourmet vegetables. In the past, there was demand for a large parsnip for the Sunday roast, but now people want smaller parsnips and Brussel sprouts.

Management in the field is vitally important so that most products are the correct size and blemish free, he says.

Rollinson believes the change to producing smaller Brussel sprouts has led to a resurgence in this vegetable. People were often put off by large fluffy sprouts that were not always as fresh as they are today due to the auction system which delayed the movement of product to consumers.

These days the Rollinsons pick in the morning and the produce is in the supermarkets the next morning, he says.

Another change is the move to more pre-packed vegetables, Rollinson says. Ten years ago about 5% of their sales were in consumer packs. Today about half of their vegetables are in pre-packs because consumers don’t want to spend all day at the supermarket.

To use retailer’s terminology, they just want to grab and go, he says.

This is also a win for retailers who no longer see wastage at the bottom of a crate of loose product. In a supermarket, people may sift through lose vegetables, some getting damaged and any of poor quality getting left behind. Pre-packs result in less waste for supermarkets.

Rollinson says they have looked at sustainable packaging — a pack that is compostable and biodegradable. But this would cost about $1/pack and the retailers don’t believe consumers will pay that premium.

The value of good staff

The Rollinsons employ 15 staff at the peak of the season.

They own 28ha and lease another 28ha and have a sheep and beef operation at nearby Waiouru.

Like all commercial growers, managing rotations is crucial to the health of the crop. The Rollinsons and their neighbours, who produce different crops, often work together to get the best use of the fertile volcanic soils of the central plateau.

Over time, new plant varieties have come on the market and these have helped meet consumers’ demands.

Despite the rise of mechanical harvesting and robotics, the Rollinsons believe hand picking works best for them, especially because they have good, local hard working workers. These are paid on a contract basis and, provided they meet the quality specifications, the more they pick they more they are paid.

Essentially they do a two-grading process, Bruce says. In the paddocks, staff must pick to a certain specification.

“Yes, you can go for mechanical harvesting of these products. But you are going to be all day in the shed grading product and that slows things down.”

Living in the shadow of Mt Ruapehu, and farming in at times challenging conditions, the Rollinsons have moved with the times.

They have tuned in to the demands of the retailers and consumers and have a strong focus on sustainability in all its forms. Success has come about by running an agile, innovative business grounded in common sense.