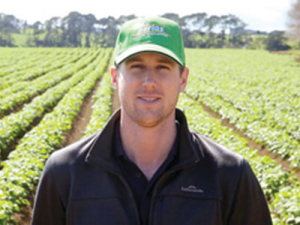 Pukekohe-based Andrew Hutchinson was the winner of New Zealand’s overall ‘Young Horticulturist of the Year’ title in 2016.

Horticulture can stay ahead of the pack by making sure we’re better than our competitors, she says.

“Competitions like Young Horticulturist foster innovation, cross-sector collaboration and leadership development, all essential to making sure NZ stays competitive and at the forefront of global food supply,” says Anderson.

“I want to urge NZers in primary business, particularly the media and also producers, to better support competitions like Young Horticulturist because they’re not fluffy ‘nice-to-haves’ – they’re essential to making sure we’re up for any challenge.”

The importance of NZ’s competitions like Young Horticulturist and Young Farmer should not be underestimated, Anderson says.

“The success of any primary industry such as horticulture is susceptible to uncontrollable factors like disease, weather and natural catastrophes, which makes fostering a culture of collaboration and innovation through these competitions essential to surviving adversity and maintaining this country as a significant food producer.”

Anderson was announcing the continued sponsorship of the Young Horticulturist of the Year competition by Fruitfed Supplies, T&G and Agmardt; the latter has just signed a three-year contract.

Anderson says apart from a handful of committed companies, it could be better supported. Within the Royal NZ Institute of Horticulture (RNZIH) Education Trust, which runs the Young Horticulturist, they are all volunteers who commit money, time and resources to ensuring we develop capable leaders who are innovative and collaborative.

“But we can’t do it alone. More need to step up and support these competitions with funding, publicity and resources.”

Anderson says she particularly wanted to thank the loyal sponsors of Young Horticulturist because their support shows them as companies that “walk the talk”.

“The kiwifruit industry’s success is an excellent example of an industry that endured and adapted to the challenges and downturn cause by the Psa bacteria,” he says.

“In this NZ demonstrated a cutting-edge response in the way we responded and managed our way through the issues and risks that confronted us by using innovation and collaboration.”

Agmardt has supported Young Horticulturist for at least 10 years because its mission is to foster innovation and capability in the farming and growing sectors, particularly building future leaders.

The national manager of Fruitfed Supplies, Max Spence, says his company supports events and activities that make a significant contribution, and there is no doubt the Young Horticulturist competition fits that description.

“New Zealand’s horticulture sectors have a bright future. The sustainability of the industry comes down to being able to produce a product that meets market demands and expectations.”

“There has been rapid change in our industry and its only accelerating. As an industry we need to keep adapting and evolving to meet the changing needs of our growers, retailers, wholesalers, consumers and people.

“We need to do more to attract people into our industry and retain great talent. The Young Horticulturist competition plays a key role in attracting and retaining young people as it celebrates achievements while testing and growing skills.”

Starting April this year, the best young men and women from NZ’s horticulture industry have competed in six regional sector contests to qualify to compete in the Education Trust’s Young Horticulturist of the Year 2017 competition.

Finalists (30 years and under) compete for a prize pool of $40,000 that includes a $7500 travel and accommodation package for the winner and a $5500 Massey University study scholarship for the runner-up, and an Agmardt Market Innovation Project first prize of $5000.

The finals this year will be held on November 15 and 16, culminating in the awards dinner at Auckland’s Grand Millennium Hotel.
Tweet