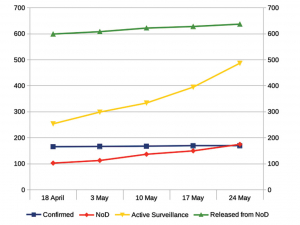 Here’s your surge: MPI data from the five latest updates since the announcement of the surge show a slight increase in confirmed Mycoplasma bovis properties, but a 70% increase in Notices of Direction (red) and a 92% rise in Active Surveillance numbers (yellow). Rural News Group/Data: MPI.

Figures from MPI to May 24 reveal 99,805 animals had by then been culled in the Mycoplasma bovis eradication programme.

However, that figure had almost certainly exceeded 100,000 as Rural News went to press last Thursday.

The figures also reveal a 92% rise (from 254 to 487) in farms under active surveillance since a ‘surge’ was announced just before Easter.

He believes acknowledgement is lacking on the mental health effects of M. bovis eradication.

“We’ve got to make sure everyone in the community supports those affected by M. bovis,” he said.

Walker claims MPI “dropped the ball” in not having acted soon enough on the number of risk properties identified late last year.

“In saying that, MPI are working as closely as possible with those affected farmers and I encourage anyone to get in touch with me if they are having problems especially in communication with MPI,” Walker told Rural News.

“They were the first to admit they could’ve done things differently over that Christmas/new year period, but they’re working extremely hard, especially everyone on the ground, to ensure we give ourselves the best possible chance of eradicating M. bovis.”

M. bovis programme director Geoff Gwyn was unavailable for comment, but he acknowledged in a statement that surveillance was difficult for farmers.

“Active surveillance means that cattle on the farm have had a low risk of exposure to M. bovis, and we need to test these herds to determine their disease status,” he said.

“These farms are not under any movement restrictions while this testing is carried out, although they should contact the M. bovis programme if they need to move the cattle being tested.”

Gwyn claims that “fewer than 5% of farms” put under active surveillance have been found to have the disease, and that percentage is decreasing over time.

“Farmers under active surveillance can move and sell cattle, but often feel that it wouldn’t be right to do so,” he says.

“We suggest these farmers talk with their graziers, stock agents and other partners to discuss the risks and see if it can work for them to still move their cattle.”

DairyNZ and Beef + Lamb NZ can talk with farmers about this.

“For only a few of these farmers under active surveillance will testing indicate a higher risk that their cattle have M. bovis, and movement restrictions will be necessary.”

Gwyn says “the need for the surge” was to contact a large number of farmers who had some risk of exposure before winter grazing movements.

He says MPI has now contacted all those farms, but will continue to contact farmers over the winter when it becomes aware of new risk movements, in particular from newly confirmed properties.

“It is positive that fewer farms required movement restrictions and that fewer dairy farms are involved. That could be a good indication that we are progressing towards eradication,” said Gwyn.