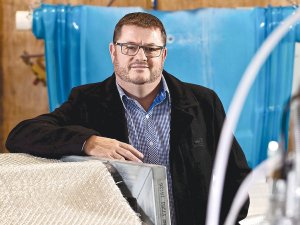 He says that while many in the industry thought the reduction in new dairy conversions was just “a dip in the market”, the conversion market hasn’t come back and it’s unlikely to.

“The large scale dairy conversions experienced in NZ over the past couple of decades were driven by different market forces than what exist today.”

Parker says this change is prompting a change in direction for Waikato Milking Systems.

“We’ve got five or six projects this winter which are just that, replacing existing rotary platforms, but we’ve got a tight window to complete the work before the next season.”

Parker joined the company as NZ general manager in July 2017 and was appointed chief executive NZ in April 2018.

The company, which turned 50 in 2017, makes milking systems in New Zealand and exports to 30 other countries. It also makes milking automation technology and dairy herd management systems at its headquarters in Horotiu, north of Hamilton.

Parker says the company needs to evolve to help farmers meet new challenges being driven by consumers of dairy products. Fieldays gave opportunity to explain those changes and show how the company could help.

Parker says it must now move from being “just a milking machine company” towards being a leader in R&D to provide farmers with the technology needed to meet consumer expectations.

“The challenge for farmers is to take a broader view outside their farm gate and realise that consumers are driving the need for more of a focus on sustainability and food traceability.

“NZ has to realise this as an opportunity and understand how to get the best price for our produce, for some of the unique advantages we have in our grass-based system.”

He also sees milking automation becoming more important as “the next generation of farmers” shows interest in adopting technology to help manage much larger herds than 20 years ago.

“The fundamentals of grass management and good animal husbandry are not changing, but how you use information to make those decisions is becoming more accurate.”

Parker says having products which capture data is now important.

“Public awareness of managing dairy effluent is high and so equipping farmers with the right technology and systems is firmly on the company’s radar.”

Campbell Parker says five years ago about 80% of the company’s revenue was domestic and 20% international.

“Today the balance has tipped to where international markets make up over 50% of the company’s revenue.”

He said the change came down to less capital investment in the domestic market, reflecting fewer dairy conversions.

It’s a shift the company had to realise, Parker said, and recently it had begun to recruit staff with different skills in sales, marketing, technology and R&D.

Partnering with companies that complement its own products was also a possibility, rather than trying to manufacture a competing product.

“In NZ you had an average of 147 dairy conversions a year for 20 years. What you needed then was a salesperson who could put a quote together and deliver on a new product. Today, you need a salesperson who can be more proactive rather than reactive. They need to find out how they can help the customer be more productive with what they’ve already got.”

Waikato Milking Systems (WMS) will use Fieldays to promote its expansion beyond milking systems into effluent and environmental products.

Adding modern technology to a dairy farm is an effective way of increasing efficiency, boosting productivity and better managing your cows.