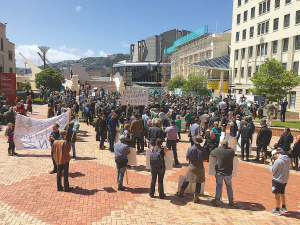 Petition organiser Terry Waite believe farmers are owed an apology at the very least and a backtrack on many of the restraints government has placed on them.

Waite was so sparked up by what he believes is the Government’s poor treatment of farmers that he started a petition, asking people to support it so it could be presented to parliament.

The petition needed to attract 100,000 signatures.

He’d tried to get his petition to ask: ‘The NZ Govt to apologise to NZ farmers’. However, the bureaucrats wouldn’t allow that wording.

Waite remains undeterred and concedes that any apology is unlikely. But he says an improvement in government treatment of primary producers would be welcomed.

“The Government has treated our primary producers with disrespect with legislative and regulatory changes as well as additional taxes, which has resulted in suicides,” he told Rural News.

“Farmers are the backbone of our country and I believe they need a public apology from our Government.”

Waite says his motivation for starting the petition came from his experience dealing and interacting with farmers every day in his business, as well as his concerns about growing suicide rates and mental health issues in the rural sector.

“I have worked in the electrical service industry for around 30 years in the King Country. I work on farms every day and talk to many farmers,” he told Rural News. “Farmers are not happy and feel the Government is their biggest worry.”

Waite says some farmers are talking about walking away from the sector as it is all just getting too much, while others are getting paid to just grow trees.

“Food production is more important for our economy now than ever before,” he adds. “However, schools have started teaching our future generations that dairy farming is bad and that sheep/beef farming is bad.”

Waite says present government borrowing for the COVID-19 crisis will be funded by our primary producers’ future exports.

“NZ’s economy was built on the agriculture sector, farmers are still working and producing and there is no subsidy for them,” he adds.

“However, farmers feel more threatened by the Government than interest rates, commodity pricing or even then the weather – and that is just appalling.”

Waite says this has seen a rise in farmer and rural suicide rates. He also blames mainstream media – especially TV and urban-based newspapers – saying they have not helped a growing anti-farmer sentiment in the country.

“If people actually knew how hard working and caring our farming people are, they might not be fooled by biased reporting,” Waite adds.

“NZ farmers are world leaders and other countries are adopting our farming practices. Even the UN says that food production should not be decreased for climate change policies.”

He cites as a prime example of the Government’s poor treatment of farmers, when a number turned up to protest that too much good farmland was being lost to forestry in Wellington last November.

“The Minister for Agriculture didn’t even give them the time of day and the remarks from the Minister of Forestry simply reinforced the Government’s disdain for farmers,” Waite explains.

“I feel that farmers are owed an apology at the very least and a backtrack on many of the restraints government has put on them.”

Waite says many small towns in provincial and regional New Zealand need a strong agricultural sector because it is their lifeline.

He says with an election coming, someone in Parliament will push for change and work with farmers, not against.