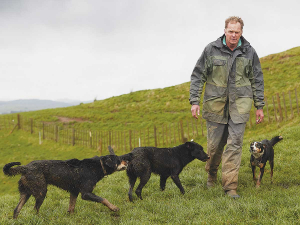 Finding and training skilled workers is a growing problem in many parts of the NZ economy and the sheep and beef farming sector is no exception.

However, instead of sitting around and bemoaning this fact, a number of like-minded sheep and beef producers from around the country have decided to do something about it.

They have established the Growing Future Farmers (GFF) charitable trust, which aims to provide industry-led, on-the-job training and work for young people keen to enter the sheep, beef and deer farming sectors.

"The flow-on effect results in substantially reduced capabilities through all levels of management and employment on-farm, and consequently, an inability of the farm business to operate at a high level."

Jackson, a North Waikato sheep and beef farmer, believes this lack of investment has meant lost opportunity for rural people, communities, industries, and ultimately, New Zealand. He points to a report published in 2019 by the Industry Advisory Group (IAG), established by the Tertiary Education Commission (TEC) as part of its Primary Sector Skills Education and Investment program, which called for transformational change to stimulate learner demand. This included an increased awareness of career opportunities in the primary sector and ensures sector education, skills and training needs are provided more effectively.

This is where GFF comes in, with its model to deliver industry training that is financially accessible, industry-respected and employer-led. Initially started with the support of Provincial Growth Fund backing. Jackson and his other trust board member's identified there was an urgent need in the sheep, beef and deer sectors to give young people the chance to learn basic farming skills on the job, without the pressure of having to justify a full salary.

Jackson says the GFF model is about raising the standard of fit for work, educated and reliable farm workers.

"It's not about bums on seats, but quality and delivering the skillset the industry requires."

The GFF programme offers an array of specialised training and development - from entry level right through to advanced and business management. The on-the-job training is complemented with formal NZQA learning that includes classroom lectures, independent study and group sessions. GFF students are offered the opportunity to work alongside experienced farmers who have signalled their support of the programme by taking on students.

For students, the GFF essential farm skills programme is a two year course, consisting of 42-44 weeks each year - starting in late January and ending in early December - and all at zero fees.

The programme comprises of practical workplace training and development, NZQA Level 3 qualifications, along with pastoral care and support. It is supported by registered farms and farm trainers around the country, teaching on-farm.

Since beginning as a pilot programme in 2017, GFF has grown from very small beginnings and is picking up and gaining momentum. Applications for the 2021 intake saw 150 students and 50 farm trainers around the country interviewed.

Next year will see 45 second-year and 64 first-year GFF students in eight regions throughout NZ.

Jackson says the GFF is now an established and proven, practical training model.

"It's a proactive programme guided by farmer employers who understand what is required in their graduates," he explains. "GFF is committed to lifting awareness and providing opportunities for careers in the food and fibre sector."

For young people keen on finding out more about the GFF training programme, or farmers interested in signing up as farm trainers go to: www.growingfuturefarmers.co.nz