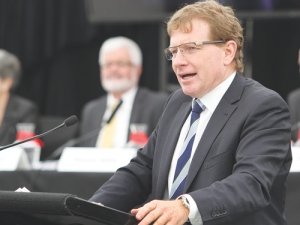 Fonterra chair John Wilson says rejection of the proposal means the board and Shareholder’s Council will have to present another option to farmers.

Fonterra's plan to revamp its board failed to attract sufficient support from farmer shareholders because it had "two fatal flaws", say opponents.

Former board member and Northland farmer Greg Gent believes denying farmers the ability to choose between candidates, and delay in reviewing the Shareholders Council, prompted some farmers to vote against the proposal.

Gent says some farmers who voted for the governance and representation proposal were also "not overwhelmingly in favour".

"Shareholders who spoke to us said they voted for it because the board is at least doing something; it's a step in the right direction," Gent told Rural News.

At a special meeting earlier this month, Fonterra's board received 63.7% support for the proposal, short of the 75% required under the co-op's constitution.

The proposal was to reduce the board to 11 – seven farmer-elected and four independent directors -- and to devise a new appointment process for all directors.

The new process would mandate candidate assessment by an independent committee and a recommendation to farmers by the board and Shareholders Council on the most suitable candidate -- meaning farmers wouldn't get to consider candidates who didn't make the grade.

"During so much of our farming careers we had a choice from effectively any and all farmers when choosing directors," Wilson said.

"While any and all farmers can enter this new process, the recommendation will be coming from the board and so that change is the piece farmers are giving most consideration to."

However, the rejection of the plan means the Fonterra board and Shareholders Council will relook at the proposal and will present another option to farmers by the end of this year.

Gent says most farmers support the "upfront process" in director election and assessment by an independent committee, but they do not support the board being able to block anyone from standing. "Anyone can stand; that's democracy in my view."

Council chairman Duncan Coull says its objective during the review was to ensure that a robust final proposal was presented to shareholders.

"We are confident this was delivered; as the owners of Fonterra the farmers' then had the right to determine the proposal's suitability; the mandate for change must come from them.

Coull says the council's review of its role and functions will begin soon.

Back to the drawing board

Fonterra chairman John Wilson is assuring farmer shareholders that the board and Shareholders Council will have another good look at governance changes.

Wilson says getting just under two thirds of support from shareholders on the first vote was pleasing.

"Of course, we would have loved to get 75%, but two thirds of support on reasonable participation is pleasing."

Wilson says farmers have made it clear the system must change.

"Under the current system, with all the electioneering we not attracting the best people; we have to look into that.

"We will go back and look at how we maintain the same outcome but at the same time consider what we are hearing from farmers."