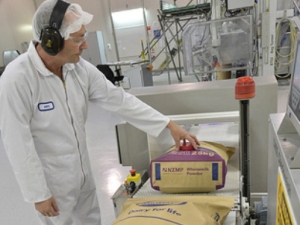 Fonterra is planning a tenfold expansion in production capacity at its Studholme factory in South Canterbury.

The dairy co-op is soon set to lodge consents for a major upgrade at the former Russian-owned plant, which it bought three years ago from the receivers and which many feared would be put out of commission at the time.

However, far from ceasing work, the factory is at the centre of Fonterra’s growth plans in the South Canterbury and North Otago regions that will see its production capacity grow from the current 900,000 litres a day to closer to 10 million litres a day – when the two-stage dryer development is completed. In addition, a large drystore and two new boilers – for each new dryer – are also proposed.

The planned Studholme factory expansion will require a million hours’ work. Site manager Alan Maitland emphasises plans for expansion remain a proposal at this stage and will require resource consent approval and Fonterra board sign-off. “Once we get consent; we will take it to the board.”

If approved, the factory extension would take up to 18 months to build, requiring up to 500 workers working from 6am until 10pm during this period.

The completed factory would require two extra trains daily taking the factory’s products north to Timaru’s port, and another supplying coal, probably from the south.

The cost of the Studholme upgrade is reported to be about $600 million, covering the two stages, with each phase expected to commence construction in 2020 and 2025 respectively. Once up and running each stage is expected to create an extra 125 new permanent jobs.

The proposed upgrade of Fonterra’s Studholme plant, along with growth capacity at its Clandeboye site north of Timaru and the recent development of the Chinese-owned Oceania plant at Glenavy shows the huge growth potential of dairy production in the South Canterbury/North Otago region.