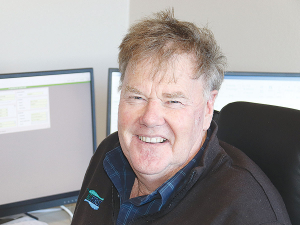 Hastings-based farm consultant Lochie MacGillivray says the Hawke's Bay is as dry - if not worse - than last year.

The hills are basically brown, but it seems like they have just received a dusting of green. Closer inspection reveals stock restlessly searching for feed that simply isn't there. However, most look in pretty good condition. On the flats, there is a bit more grass and some crops, but again there are places where only the tough old native grass species have survived and offer pretty basic tucker.

Lochie MacGillivray of AgFirst in Hastings, says the region is dry and, in terms of soil moisture, it's similar to - if not worse - than last year. He says it's a bit more patchy than last year, with some areas north of Napier that are faring quite well, but in general the soil moisture deficits are the same, if not lower, than last year.

MacGillivray, who is on the local Rural Advisory Group (RAG), says a recent survey of farmers produced some interesting results. He says most farmers believed they are actually better off than they were last year, by a long way, despite it being drier. But he told Rural News this tends to mask some underlying issues, such as the fact that farmers never really got back to stock numbers that they had before the drought.

McGillivray says farmers reported that their stock were in good condition and all the participants in the survey said they had a plan and were able to manage through the winter. He says they also reported that, in terms of mental health, they were okay.

“The worrying bit… is in relation to one of the questions we asked and that was ‘do you have a formal feed budget’ and most didn’t,” McGillivray adds.

“The problem with that is that if we have a normal winter, maybe their expectation is that they will get through. But if we have colder winter than normal, or their assessment is not quite right, they could find themselves in a bit of hole quite quickly.”

MacGillivray says doing a formal feed budget and sticking to that is what the RAG group is recommending what farmers do.

“Without a plan, there tends to be a void and that void tends to be filled with anxiety,” he told Rural News.

MacGillivray says the other message RAG is trying to get out to farmers is to monitor their mental health and also check on neighbours and friends. He says, in the nicest possible way, they should ask how they are doing and ensure they get help if they need it. RAG is monitoring the situation and meeting on a regular basis to assess the situation.

McGillivray says they plan to conduct a survey to check on small block holders and they are also watching carefully the plight of a group of farmers in the north of the region, whose herds have been hit by TB.