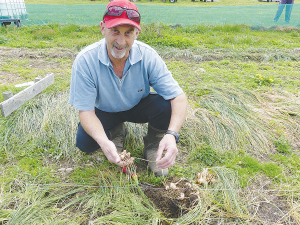 Geoff Slater with the crocus corms he will soon be lifting, separating and replanting in a major expansion to his saffron farm. Photo: Rural News Group.

“I always reckoned you could make a living off 10 acres,” says Canterbury saffron grower Geoff Slater.

“I think if you get the right products you definitely can.”

For Slater and his wife Jude, their 10-acre (4ha) slice of paradise at Eyrewell, north of the Waimakariri River, is where they are building a multi-faceted business trading under the Canterbury Saffron banner.

Saffron, a highly valued and brightly coloured spice, harvested from a particular species of crocus flower, was always part of the plan when the couple moved to the block in a lifestyle change prompted by Jude suffering a stroke a few years ago.

Their first 6000 corms have now been in the ground four years, which means this November is time for their first big expansion. The corms multiply annually in the ground and the Slaters expect to have about 100,000 by the time they have lifted, separated and replanted the best of them in a new 1ha plot.

Used for millennia for flavouring, food colouring and as a fabric dye, the valuable parts of each flower are the three bright red or orange “threads” carrying the stigma, or female pollen receptors.

But at roughly 170,000 flowers to a kilogram of threads, it is a labour-intensive crop, which is why it has long been regarded at the world’s most expensive spice. Supermarkets in New Zealand and Australia offer it in 0.5 and1 gram packets, at prices equivalent to between $10,000 and $15,000/kg.

Slater says the 100,000 plants he hopes to have in production next season might net them about 750g. He reckons they have enough space eventually to plant about 5 million corms.

At this time of year, crocus plants are dying back to lie dormant through summer. They start producing leaves in March, closely followed by the flowers.

The flowers are manually picked as fast as they appear, every morning for about a month. They are then brought inside to the Slaters’ “packing shed” - the living room table – to separate out the valuable threads.

Up against cheaper international labour, New Zealand growers rely on the quality of their product.

“We had ours tested last year so we know that we’ve got premium, Grade One saffron,” Slater explains.

He says it is no more difficult than mainstream market gardening “if you put the hard work in.”

“You don’t get anywhere, sitting around.”

Slater is trying to make the operation as mechanised as possible. He has built his own row-former which he towed behind a tractor to build the raised beds for the new plot and is now building his own corm planter “which I believe is the only one in New Zealand.”

Up to now, the Slaters have exported all their saffron harvest to Tasmania in conjunction with another local grower.

Slater says that makes for a guaranteed income, but they are diversifying into their own products, including a saffron and kumara-leaf tea, for which they will be growing their own kumara.