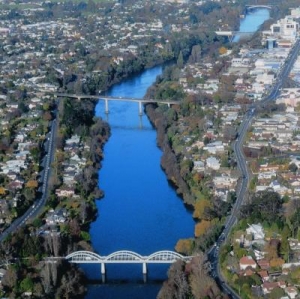 Leaders in the science, education and agriculture sector met to progress plans for the Waikato Agricultural Research Hub.

Representatives from a range of Crown Research Institutes, universities and the agricultural sector met with Hamilton City Mayor, Julie Hardaker, to discuss the challenges that the country and the region face in the future development of agriculture.

'Ensuring we have both clean water and productive land is a particular innovation challenge that we are up for and ideally positioned to address in the Waikato,' says Dr Bryce Cooper, general manager strategy for NIWA.

Vice-Chancellor, Professor Roy Crawford says the University of Waikato welcomes the initiative. "We are well placed to add social, environmental and economic value to the region."

Michael Spaans, CEO of Innovation Waikato comments that "The mix of educational, scientific and commercial capability in Hamilton and the Waikato will deliver increased agricultural productivity. We want to add value from farming, product design and supply chains and, crucially, better, more sustainable farming systems."

The parties agreed that Waikato was in a unique position to contribute to research, innovation and education to achieve achieving the government's goals for growth in export earnings and better environmental performance.

"Driving the doubling of exports through strong regional clusters is a core strategy for AgResearch. As the country's largest Crown Research Institute we've got a key role to play in supporting the national aims. Agriculture is critical to Waikato's economy, and having a strong regional innovation cluster here will help us deliver the science needed to create growth." Dr Tom Richardson, AgResearch chief executive.

The parties worked on a concept document, outlining a vision and operating regime for the Waikato Agricultural Hub, with the parties meeting again in a month to finalise the document.

John Luxton, chairman of DairyNZ says "It is really important that various stakeholders, including our community, government and commercial organisations, are able to see the prize from this concept, and we look forward to discussions and feedback in the near future."

A new research winery in the heart of New Zealand’s vine country will be a “drawcard” for international researchers, says MJ Loza.