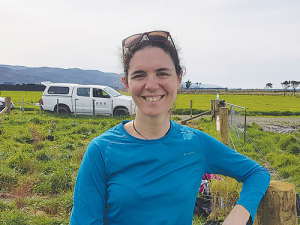 ESR’s Dr Maria Guitierrez-Gines says lab work shows that both manuka and kanuka reduce nitrate leaching more effectively than pasture or pine trees. She is now running outdoor trials to see if this is replicated on farm.

A new field trial in Wairarapa is using native plants to clean up farm runoff into Lake Wairarapa.

Scientists from ESR (Institute of Environmental Science and Research) are looking at the potential of mānuka and other native trees to reduce the leaching of nitrate and other pathogens from farm runoff.

Dr Maria Gutierrez-Gines, a scientist at ESR, says laboratory work show that mānuka and kānuka enhance the die-off of E.coli in the soil and reduce nitrate leaching more effectively than pasture or pine trees.

Gutierrez-Gines and other researchers from Scion and Lincoln University first worked with pine trees. But iwi with whom they were working suggested they try using native plants instead of pine.

Gutierrez-Gines says they experimented with manuka and kanuka to see if these species could absorb nitrogen better than pine trees.

“These experiments showed that E.coli and salmonella die faster in manuka and kanuka than under pasture,” she told Rural News.

“They also showed that the nitrate leaching was ten times less under manuka and kanuka than under pine trees. Recent research also suggests that rata and horopito may have similar properties.”

Based on the results of these laboratory experiments, Gutierrez-Gines and her fellow scientists are running field trials to see if the results can be replicated onfarm. Trials are underway at Lake Wairarapa where 1.5ha are planted, and 4ha at Lake Waikare, 40km north of Hamilton.

“Our part in the project is to study the contribution of each plant species into nutrient and pathogen fluxes in the soil and in the plants and to see which one offers the best potential to remediate the impact of farming activities on the lakes,” she says.

The trial in Wairarapa is the joint work of ESR, local iwi and Greater Wellington Regional Council; they have planted native trees on land donated by iwi and local farmers.

GWRC land management advisor Kolja Schaller says he is getting a lot of support from farmers around the lake participating in the trial.

“The land owners want better water quality, so they’ve put their hands up and given their land for this trial.”

Schaller says the plantings are at a range of widths to see what density of plants is required to get the same or similar environment outcomes.  They will also look at getting data on the impact of the buffers to help inform farm nutrient budgets.

“There is big potential long term for native plant-dominated riparian zones. It’s a win-win if we can plant a species like mānuka that provides an ecosystem service, reducing the nitrates; and at the same time there’s an economic benefit because of the oil and the honey.”

“We farm on the edge of this beautiful lake, so if there is anything we can do to minimise future damage we are lucky to be part of it,” she says.

The trials are in their infancy and Dr Maria Gutierrez-Gines says it’ll be at least one year – possibly two years – before they will know whether the results in the laboratory are matched by those onfarm.