Masterclass had lessons for all sectors 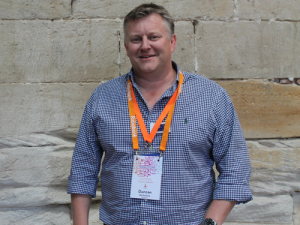 Winegrower Duncan McFarlane says there’s been plenty to learn from the other sectors.

Despite being the only winegrower in the Rabobank Master Class this year, New Zealander Duncan McFarlane says there’s been plenty to learn from the other sectors.

McFarlane, of the Indevin Group in Marlborough, says one issue that everyone is focused on is sustainability.

“We are very fortunate in the wine industry in New Zealand that the economy of the industry is in a strong phase with good growth prospects,” McFarlane told Rural News at the Rabobank Farm2Fork summit at Cockatoo Island in Sydney yesterday.

“Not many of the industries that are represented here globally are in that cycle.

“That is a reminder that we might think we are in a good part of the cycle now – that won’t last forever.

“Also there is the issue of as the industry expands – how we expand sustainably – we need to bear that in mind. There are a lot of industries here that are a lot older and they have already gone a long way down the path that some of the development they did was not sustainable and they are now having to deal with it.”

One example was in Brazil with soil fertility.

The 50-strong Master Class is now travelling to New Zealand.

The Farm2Fork Summit brought together agribusiness leaders, farmers including about 100 from New Zealand, food and agri start-ups, technology innovators, investors and others in a one day event at Sydney’s Cockatoo Island yesterday.

The invitation only with about 1000 participants focused on innovation and the food and agri trends of the future.

It also featured a FoodBytes! Programme designed to showcase innovative and ground-breaking concepts in food and agriculture to potential investors.

About four or five New Zealand farmers are involved in this year’s Master Class along with leading farmers from around the world including North America, the Netherlands, Ireland, South America and Africa.

They travel to New Zealand today where they will visit the Te Whenua Hou farming development and be welcomed to New Zealand by Hayley Moynihan, General Manager Country Banking NZ at Rabobank. Saturday’s highlights will include looking at pork production at Patoa Farms.

On Sunday they will look at precision agriculture with Methven Greenvale Pastures, Three Springs Dairies Ltd and Agri Optics NZ Ltd then look at ‘Going green while staying out of the red’ by Ben Todhunter, sheep & beef farmer, co-owner of Cleardale Station Ltd They will also be hosted by Grant and Ele Ludemann at Winslow Farm.

On Monday they will look at dairy including a visit to Synlait and look at dairy price volatility by Tim Hunt, general manager Food & Agri Research at Rabobank, with addresses by a number of other dairy experts.

Tuesday’s activities include a look at Icebreaker.