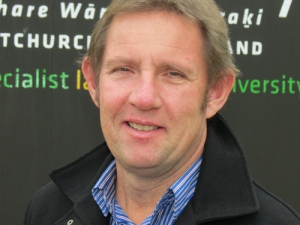 Speaking to Rural News at the Careers in Agriculture hub at Fieldays, Hickford says this is a huge problem, compounded by NZ's rapid urbanisation and disconnection from the agri sector.

The problem now is to find enough good young people to work in agriculture.

"The problem across the western world is that young people are entirely urbanised and don't realise the job opportunities out there on the land. In the case of NZ, agri defines our existence as a country.

"It is easy to pick the young people out on the land and get them enthusiastic; but impossible to get to an urban school and convince them agriculture is important. They don't get it."

Hickford says once young people have a basic grounding in agriculture they can move into a range of professions -- accountancy, property valuation, human resources and even rural news reporting.

He says the Fieldays careers hub was a good idea even though it lacked displays of technology. "This site doesn't look as flash bang as it might, but I'm not sure that's a part of it. It's really about knowing about jobs and money and security."

One instigator of the careers hub, Lee Picken, event manager for the Fieldays Society, says the idea arose out of hearing government plans to double exports and the consequent need for more people to work in farming.

And the message about attracting more young people also came from the 1000+ exhibitors at Fieldays. The education hub was partly in response to their requests.

Picken says education is a pillar of Fieldays, on par with the event's emphasis on innovation.

"The focus of the careers hub is getting the likes of PGG Wrightson, Ballance AgriNutrients and Growing NZ, all of which offer scholarships. And AFFCO is in there because of its apprenticeships.

"The hub allows students to come in and determine not necessarily their next level of education, but more where they will take their career."

Universities, some secondary schools, DairyNZ and Young Farmers were at the Careers Hub this year, and Picken predicts others will join next year.