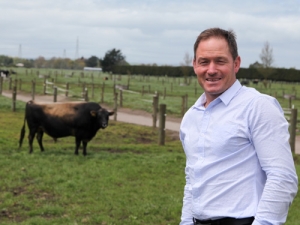 A fresh intake of dairy genetics has given the industry's Ranking of Active Sires (RAS) list a shakeup this month.

A number of new names are making their debut as some of the country's highest ranked artificial breeding bulls.

Twelve new 2011-born (12-code) bulls have knocked some of their ancestors off the RAS list after the DairyNZ animal evaluation update on October 10 incorporated herd testing data from new offspring now being milked on farms around the country.

Jersey bull Bonacord TGM Brock leads the group of new graduates from LIC's sire proving scheme, taking out the top spot for his breed on the RAS list and as the highest ranked young graduate across all breeds (Cross, Friesian and Jersey).

He joins Lynbrook PS Solar-Keet (KiwiCross™) and San Ray FM Beamer (Holstein-Friesian), as the new trio of top bulls for their breeds. The three bulls are owned by farmer-owned cooperative LIC, which breeds about three quarters of the national dairy herd.

Following the animal evaluation update, the co-op's stable now holds 14 of the top 15 bulls across all breeds and 18 of the top 20 Holstein-Friesians.

"Given that we are responsible for around three out of four calves born on New Zealand dairy farms, we have a responsibility to continue to drive genetic gain for the industry and our farmers, and set new benchmarks in production efficiency.

"These results will not only reaffirm their investment into high quality genetics this season, but also their co-op's investment into breeding programmes to deliver new genetics which supersede the previous generation."

Ellis says the results are a culmination of a solid breeding programme, outstanding sire proving scheme and careful selection criteria.

"One of the things I really enjoy about this job is that you can't hide from the numbers. Everything is measured. If you pick bulls of high genetic merit they will deliver on the RAS list.

"Often individual farmers have elements of personal selection criteria but the RAS list is the industry's independent measure of excellence, based on the industry-designed and owned national breeding objective."

A number of the new 2011-born bulls will now form part of LIC's premier Forward Pack team, available to farmers this spring.

Ellis says their addition will strengthen the team's appeal to many farmers who are looking to get their hands on the fresh new genetics for their herd as early as possible.

The country's new number one Jersey sire, Bonacord TGM Brock 312023, was born in Outram, south of Dunedin by Peter and Raelene Allison and family.

Born in 2011, Brock's elite status as an artificial breeding sire was originally identified in his DNA, which saw him enter LIC's Sire Proving Scheme (SPS) in 2012 and become available in the co-op's genomically selected Premier Sires team.

From this early utilisation and now freshly graduated from SPS, Brock has 328 daughters milking on farms around the country. With their herd testing data now available, he has debuted onto the DairyNZ RAS list (10 October 2014) with 280 breeding worth (BW) and 74% reliability.

By the end of this season, he will have just over 1000 daughters. He also has two half-brothers in LIC's sire proving pipeline and three other relatives.

Have your say — Moore

Waikato farmer Ben Moore is urging farmers to have their say on the DairyNZ levy vote, which closes this week.