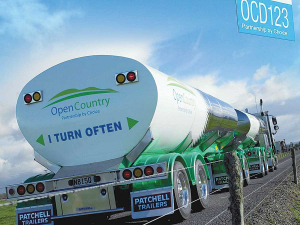 OCD was fined $221,000 for discharging objectionable odours from its Waharoa factory.

Waharoa residents are looking forward to getting on with their lives without “unwanted intrusion” from a nearby milk processing plant.

Waikato Regional Council investigations and incident response manager Patrick Lynch says it has the greatest sympathy for the Waharoa community trying to live with the terrible impacts of stench coming from the Open Country Dairy plant.

The case was brought against OCD by the council following many complaints from local businesses and residents of Waharoa, near Matamata, through two periods in 2018.

This is the fifth prosecution of the Waharoa plant relating to unlawful discharges into the environment, and the largest fine imposed for any prosecution under the Resource Management Act in Waikato.

Residents reported ongoing, persistent and objectionable odour. They described a range of debilitating effects, eg having to keep doors and windows shut, headaches and vomiting.

The council responded to the complaints and began investigating. In March 2018 the council found the odours arose from the failure of the company’s wastewater pond liner. This resulted in contamination of the Waitoa River.

In her ruling, Judge Melanie Harland said the odour impacts on residents were “profound and, of their kind, serious”.

On top of the fine, OCD also agreed to pay $2000 reparation to each of the 17 residents and businesses affected by the odour.

Justice Harland also noted that at a restorative justice conference OCD also agreed to donate a vehicle to provide security to the community.

“It continues to pay the costs associated with the operation of the vehicle, which amount to some $40,000,” she said.

Lynch says the council investigator has communicated directly with the complainants following the court decision.

“I think it is safe to say they’re just wanting to get on with their lives without unwanted intrusion from this company’s activities,” he told Rural News.

“As ever, we will be vigilant for complaints received from members of the public and respond accordingly.”

• Enforcement order prohibiting company from discharging odour beyond its boundary.

The country’s second-largest milk processor is warning its suppliers to expect lower milk prices in the months ahead as milk supply around the world increases.

The sentencing of Tony Kuriger, the son of National Party Taranaki-King Country MP Barbara Kuriger, on animal welfare charges has been delayed until June 12 due to the COVID-19 pandemic.

For the country’s two largest milk processors, it’s business as usual: milk is coming in, being processed and products shipped to offshore markets without any major hitch.