Overseer is no silver bullet! 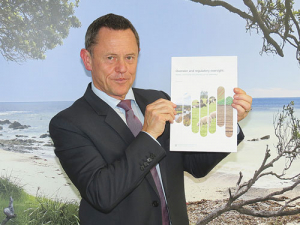 The Government is being called on to offer official guidance on how regional councils should use the nutrient measurement tool Overseer.

The Parliamentary Commissioner for the Environment has effectively put the kybosh on using Overseer for regulatory purposes until some major changes are made to it.

In a detailed 136-page report, Simon Upton points out that Overseer was designed as a farm management tool to calculate nutrient loss on pastoral farms. But he says it’s now being used by some regional councils to define regulations.

“For all the fascinating detail this investigation has traversed concerning Overseer and farm based nutrient management, I am left with a keen sense that resolving nutrient pollution will have to commandeer a much wider array of tools.”

In other words Overseer is not a silver bullet.

Upton has called on the Government to say clearly whether Overseer may be used as a regulatory tool, and if so, more the model needs more transparency and should be independently peer reviewed and analysed for sensitivity and uncertainty.

Upton says the Government must also provide official guidance on how regional councils should use Overseer.

“In the meantime, regional councils can still use it but they need to be aware of its limitations.”

Upton points out that if Overseer is to be used in framing regulations then the product must be trustworthy. He says while it works reasonably well in some regions — Waikato and Southland, where a lot of data has been gathered — the variations in other regions can be wide because the model doesn’t contain sufficient information for accurate assessment. And it requires modifications for it to be used in horticulture.

“Bay of Plenty Regional Council, which has a major problem around Rotorua, has used Overseer in a very intelligent way and it has helped solve specific issues they have there,” Upton says.

The report reveals a distinct lack of information needed to confirm Overseer’s use in a regulatory setting, and this means that a well-resourced evaluation of it is needed.

The report says one of the assumptions built into Overseer is that all farms have adopted good management practices, so regional councils must ensure their compliance monitoring is of the highest order.

“Overseer and the use of it by regional councils has been rightly criticised by farmers and commercial growers. The only way forward is to refine it so that it becomes a trusted tool,” Upton says.

“I am not aware that there is another tool waiting in the wings and certainly a lot of investment has been in it, so it’s better to modify it and not waste that investment.”

Tick of approval for OverseerFM

Overseer Ltd says it welcomes the recent launch of an independent review of its environmental modelling software and is looking forward to working with the review panel.