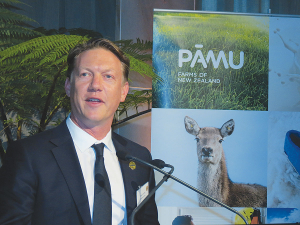 Government-owned farmer Landcorp (now called Pāmu) is claiming commercial sensitivity as the reason for refusing to reveal the cost of funding a publicity campaign about its operations on the website newsroom.co.nz.

But, it has confirmed that chief executive Steve Carden approved the deal.

Following revelations that the state farmer had entered into a “partnership agreement” with Newsroom, Rural News filed an Official Information Act request for more details.

On May 16, the website published the first of a series of five ‘content partnership’ articles claimed to be looking at “innovations and new ways of farming being introduced by publicly owned farmer Pāmu”. A second article was published on June 21.

Rural News filed its OIA request on May 16 asking, among other things, how and why this content partnership arrangement was made and who gave approval for it?

After a delay of at least one month, on June 20 Landcorp’s senior legal counsel Kim Elwood replied, declining to answer under section 18 (d) of the OIA.  Instead, she referred to an answer, by the minister responsible for Landcorp, Shane Jones, in reply to a written question on the same subject posed by National’s agriculture spokesman, Nathan Guy.

Jones’ answer to Guy is vague and non-specific. It reads:

“I am advised Landcorp has entered a limited content partnership with Newsroom, which will see Newsroom research and publish a series of five articles on different aspects of the company. These articles are produced by Newsroom journalists, with Landcorp’s role being to facilitate access to its operations and ensure accuracy. There is no timeframe for publication of the articles.”

Jones also claims that “informal farmer and industry leader feedback on raising awareness of the work the company is doing… is a key opportunity to improve the company’s contribution to the future of successful farming in New Zealand”.

“Landcorp advises that it has identified that one of the ways it can cost effectively raise the value it creates for NZ agriculture is by raising farmer and wider public awareness of these important applied demonstration trials through a relationship with Newsroom which has a wide audience reach. In this way, Landcorp advises, it can increase its value as a SOE to the primary industries,” says the minister.

Jones’ answer did not reveal the costs to taxpayers of the campaign, claiming instead that “the terms of the contract with Newsroom are commercially sensitive”.

When asked by Rural News for a cost benefit analysis of the deal and readership figures for Newsroom, Pāmu supplied the rather unreliable Google Analytics numbers supplied to it by the website, which claim “210,000-plus monthly uniques” – whatever that means.

Pāmu concedes that Newsroom does not break down readership by occupation (e.g. farmers), “but geographically they have around 24% in total [who] live in the ‘regions’.”

However, media experts spoken to by Rural News question both the value of the campaign and the readership methodology used by Newsroom and Pāmu to justify it.

One expert also questioned Pāmu’s use of Newsroom and the small readership it offers, saying its audience is a very peculiar one for a promotional/information campaign on the latest trends in farming.

“It’s a rather obscure website more known for its beltway exposés on politicians and government bureaucracy than any serious agribusiness journalism,” he told Rural News.

“Its extent of agricultural stories seems to focus on lectures on the farming sector’s lack of action on climate change by environmental advocate and cycling enthusiast Rod Oram.”

According to Pāmu’s 2017-18 annual report, net profit after tax was $34.2 million – down by $17.7m (34%) on the previous year, which it blamed on lower gains from forestry and livestock and a higher tax liability.

But despite this less than stellar financial performance, Pāmu still paid big salaries to about 25% of its staff.

And the biggest earner – most likely chief executive Steven Carden – took home $729,000 for the year.

Yet despite the big bucks paid to its top 25% employees, Pāmu claimed in the annual report that during the year it “continued to see high employee turnover on our farms”.

Said the report, “During 2017-18 we analysed reasons for high turnover in our dairy business and have made changes as a result.”

The company makes no mention of the changes it made nor any analysis of the high staff turnover rate.