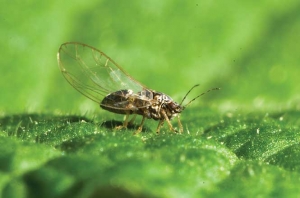 Release of a type of parasitic wasp is proposed as a biological control agent to combat a psyllid - plant louse - that attacks tomatoes, potatoes, capsicums and tamarillos

The Environmental Protection Authority (EPA) has opened submissions on an application to release the wasp.

The application, from Horticulture NZ, on behalf of a number of growers' industry groups, seeks approval to release the psyllid parasitoid Tamarixia triozae (the wasp) to kill the tomato potato psyllid or TPP (Bactericera cockerelli).

This application was made under the Hazardous Substances and New Organisms (HSNO) Act 1996.

"Biological control is where the natural enemies of a plant pest (weed) or insect pest are released to reduce, eradicate and / or control those pests. We're notifying this application to ensure that the EPA can consider all views about potential risks and benefits of introducing Tamarixia triozae into New Zealand," said applications and assessment general manager Sarah Gardner.

The psyllid was first found in New Zealand in 2006. It has been reported as a pest in several countries. If left without control it can have a significant impact on plant health and crop yield.

The psyllid has three life stages – egg, nymph and adult. Adult females lay eggs on the upper and lower surface of potato, tomato, capsicum and tamarillo plant leaves. Both nymphs and adults feed on the underside of leaves, causing discoloration and stunting of the plant, with poor or little fruit growth. The psyllid is also known to transmit a bacterial pathogen that causes Zebra Chip disease in some horticulture crops, like potatoes, which also impacts crop yields.

Tamarixia triozae is a parasitoid which means it attaches to or within a single host and eventually kills it. It is a small, black, winged red-eyed wasp that is found mainly in North America and Mexico. It lays its eggs on the surface of psyllid nymphs (the host). Once hatched, the eggs develop into larvae that feed on the psyllid nymphs, eventually killing them.

If released as a biological control, Tamarixia triozae will establish self-sustaining populations, meaning it will be able to live and reproduce without any human intervention in the New Zealand environment.

The application concludes that this would reduce psyllid pressures on potatoes, tomatoes and other solanaceous crops. If released Tamarixia triozae will not be constrained in the environment and its movement and interaction with other species will be unrestricted.

The applicant notes that Tamarixia triozae would be part of an integrated pest management (IPM) programme, using the natural enemies of psyllid to achieve effective control in combination with traditional and chemical control strategies.

The public are invited to make submissions on the application to the EPA. The submission period opens on Thursday, February 11, 2016 and closes at 5pm on March 24, 2016.

Submissions are an opportunity to provide further information and raise issues about an application. They will inform a decision-making committee that will decide whether to approve or decline the application.

A public hearing may be held before a decision is made. The EPA will provide at least 10 working days' notice of the hearing date, time and place. We'll provide this information to all submitters and the applicant.

The EPA's role is to decide on applications for the release of new organisms under the HSNO Act. It assesses the benefits, risks and costs of releasing new organisms to safeguard people and the environment.