Pig farm is tops down South 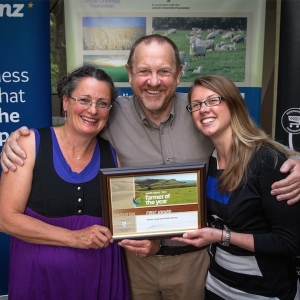 Steve and Josie Sterne with their daughter Holly.

The large-scale free-farmed pig breeding and finishing operation at Hawarden was one of four high calibre entrants vying for the top prize of a $20,000 travel grant for business study.

According to Foundation chief judge Nicky Hyslop the judges were impressed with the farm's robust technical production system at all levels including the sows, despite being outside.

The farm, which is managed by Steve and Josie Sterne, with daughter Holly Sterne, has 3,500 breeding sows and sells 115,000 fat pigs annually. It employs 43 staff and has a $25 million annual turnover.

"When I went farming at the age of 39 I did not expect to be standing in front of an audience like this today. The dream is possible. You should not be deterred by the huge effort of amassing enough capital to go farming. I started with three pigs in a woodshed . . . they keep multiplying," says Steve Sterne on receiving the award.

Patoa Farms also picked up the BNZ award for Human Resource Management and the Farmlands Cooperative Prize for Resource Use Efficiency.

Runners up for the South Island Farmer of the Year were Robin and Lois Greer, who operate both a conventional and an organic dairy farm on adjoining properties (120ha organically farmed, 160ha conventionally farmed) at Tuturau, Southland. Their business includes the production on site of their own brand, Retro Organics, of organic dairy products including yogurts and cheeses.

Hyslop says that the operation of the on-farm factory, and the Greer's strong focus on added value from the production system to market, were outstanding aspects of this business. Judges also praised high levels of innovation in the business, especially in terms of developing new products.

Other winners on the night were; Zino Holdings Ltd, who was awarded the Silver Fern Farms 'Plate to Pasture' award for their sheep, deer and beef cattle farm, and Barry and Julie Crawford who took home the Lincoln University prize for Technology and Innovation for their sheep farm.