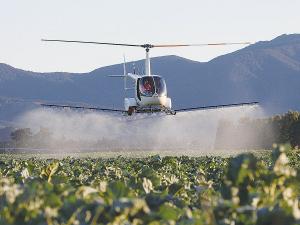 Glyphosate, if used according to controls and regulations, is safe and highly beneficial.

The Environmental Protection Authority (EPA) says it called for information about glyphosate last year because it "felt it was the right time to tak another look at the chemical". Submissions closed last October and the public feedback was released earlier this month.

While glyphosate is commonly known as the active ingredient in Roundup, there are 89 mixtures containing glyphosate approved for use in New Zealand.

Some 465 responses were received by the EPA. Its general manager of hazardous substance and new organisms, Chris Hill, says the public contributed just under half of all these responses, at 48%, with professional users such as councils accounting for 42%. The remaining 10% of the responses were from organisations, and those involved in the supply chain.

Others raised the many benefits of glyphosate, especially how it has enabled no-till agriculture that does not disturb soil.

"Glyphosate kills weeds when preparing seed beds for planting Responders said that without glyphosate, outcomes for the environment and the economy would be worse."

Hill says the responders who were professional users said that glyphosate, if used according to controls and regulations, is safe and highly beneficial. Others pointed out that any chemical is dangerous if used incorrectly, but that risk can be avoided or mitigated through appropriate protective measures.

The majority of the public who responded to the EPA's call for information on glyphosate (60%) did not use the product and think it should be banned or restricted. The othrs were domestic users who mainly supported glyphosate use, perhaps with extra restrictions.

Hill says no decision has been made about whether to reassess glyphosate overall.

"We initiated the public call for information about glyphosate so we have a greater understanding of the New Zealand context.

"The European Chemicals Agency and the European Food Safety Authority are reviewing the classification and approval of glyphosate, and plan to release their findings in 2023."

Hill says the information that the EPA received from the public will better prepares it to assess the European findings and consider further actions for New Zealand.

The agency’s next steps include seeking the views of Māori about glyphosate. “We need more information about the impacts of glyphosate use on Māori so we will be making efforts to deepen our understanding of Māori perspectives. This will help us make more informed decisions in future,” Hill adds.

The EPA will also review polyoxyethylene amine (POEA), a nonactive component of some glyphosate-based products and other pesticides. It is a surfactant added to help glyphosate penetrate into weeds.

There are claims that POEA is more toxic to people and the environment than glyphosate.

More time has been added for submissions on the potential phase-out of hydrogen cyanamide, an active ingredient in sprays commonly used by kiwifruit growers.