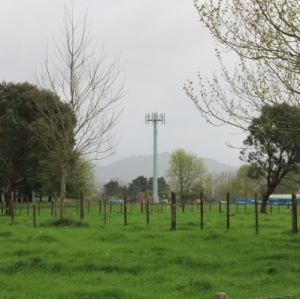 MOBILE AND broadband options just got better for residents and visitors to the Te Kowhai West area of Hamilton, as Vodafone lights up its newly built cell site under the Government's Rural Broadband Initiative (RBI).

A 30m monopole tower provides service to an estimated 715 households in the Te Kowhai West area. The service delivers not only mobile coverage, but wireless broadband via a high performance modem, adding a WiFi network into the home. Phone calls can also be made through this service by plugging an existing landline phone directly into the modem, removing the need for a landline connection. Customers can port their existing landline number to this new service.

Along with the new RBI site in Te Kowhai West, two new towers are planned to be built in the Waikato district over the next three years, including at Whatawhata West and Te Uku. Jointly these will provide new mobile coverage and wireless broadband for over 2000 homes and businesses. Vodafone has already upgraded all seven of its existing sites around Waikato this year, including towers at Te Kauwhata Straights, Tamahere, Taupiri, Ngaruawahia, Ohinewai and two towers at Whatawhata to deliver the wireless broadband service to rural residents.

"Switching to wireless broadband can provide a consistent and reliable service to residents. It also offers the rural farming community the opportunity to increase production and monitoring through machine-to-machine automation."
An additional benefit of RBI for rural communities is the extension of mobile coverage to include 4,500km of rural New Zealand roads, which until now have been without.

"This is a massive benefit for farming districts like Waikato, in dealing with emergencies, transport logistics, road safety and other real life circumstances that have been hampered by limited coverage," said Andrew.

Under the five year RBI plan, Vodafone will upgrade 387 existing cell towers and build a further 154 new towers in rural areas all over New Zealand. The government is funding the civil construction costs of these new sites which are designed to accommodate Vodafone equipment and that of other mobile and wireless operators. Fifty-eight new sites have been built so far, and an additional 179 have been upgraded meaning new services for over 125,000 addresses in rural New Zealand.

Customers can find out if this service will be available at their address by checking online at
www.vodafone.co.nz/rural-broadband.