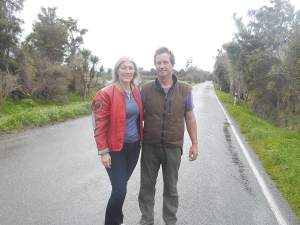 A Golden Bay couple are calling for an ‘omnibus’ to carry school pupils and the public together to improve road safety and better connect rural communities.

Deborah and Tim Rhodes want the Government to extend the existing free bus service to include not only all children but also senior citizens and fare paying adults.

The service could keep the existing routes and travel times, essentially school hours.

For the last three years the Rhodes have tried to get the Ministry of Education (MoE) and the local school bus operator to bend on eligibility criteria.

The Rhodes wanted to put their three kids Alvin (14), Bonnie (12) and Royce (11) on the Collingwood Area School bus but they were ineligible because they lived too close to the school.

As high school students, Alvin and Bonnie came under the 4.8 km minimum distance for the bus, while Royce at primary school was ineligible because he lived less than 3.2 km from the school.

Instead, students were forced to take their chances walking or biking along a busy, sometimes congested road.

“It doesn’t have any shoulders, it’s a narrow road and it’s the road on the way to Farewell Spit so it’s incredibly busy in the summer,” Deborah Rhodes told Rural News.

The road also carries 50 tonne trucks heading to a dolomite mine at speeds of 80 km/h or more.

She says they had struggled to get a sympathetic response to their safety concerns until a month ago, when a Waikato district mayor, Allan Sanson, said the region’s roads are unsafe for walking children.

The Rhodes were about to give up their bus fight when they hit on the omnibus idea, knowing that bus companies already had discretion to “pick up children and have them pay for a ride”.

Funding for an omnibus service would come from MoE, from adult passenger fares, from the Gold Card scheme, tourism, Ministry for Children and the regional development budget.

As a public service the bus would pay its way partly by tourism revenue including the growing homestay industry.

“So the rural omnibus is actually broader, bigger, wider – encompassing of all transport for rural communities.”

As a social stimulus the bus would improve quality of life and reduce the need for people to move into institutional care, the Rhodes argue.

The omnibus would allow students to take a bus to a school of their choice, Tim Rhodes says. And it would give rural kids more social outlets.

Arguing that the service could operate anywhere, the Rhodes have asked Rural Communities Minister Damien O’Connor MP for West Coast/Tasman) to investigate the creation of a new agency, Rural Omnibus, to run rural school bus services.

Deborah Rhodes said when O’Connor visited Collingwood Area School early in September he didn’t promise changes but said he had “initiated his people looking at the rules on fare paying adults and school children on school buses”.

She said they stressed to O’Connor they wanted an omnibus, not a more flexible school bus.

“So as far as we’re aware, Damien has taken the idea on board and has his bureaucratic team starting to look at it.”

A spokesperson for O’Connor says the proposal is an electorate issue and that an electorate staff member was not immediately available to comment.

Rural News asked for a response from O’Connor as Rural Communities Minister.  He did not respond before press date.