Scheme a benefit all round 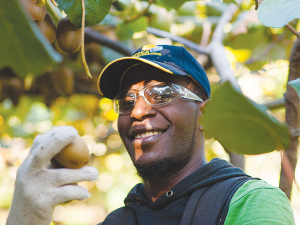 According to Hort NZ, the RSE scheme helped the industry keep up with production and benefitted the Pacific region by $50m last year.

“It’s because of the scheme’s success and vital role in our industry that we would like to see the scheme expand and more Pacific people be able to take up opportunities in NZ,” said Chapman, who attended the RSE Conference in Vanuatu in July.

“It’s hard to understand without seeing it firsthand the huge difference money earned through the scheme makes.

“It is used in the Pacific to build cyclone resistant housing, pay for education, and set up businesses such as coconut pressing and furniture construction, plus the more common tourist accommodation and tour businesses.”

Chapman says the scheme helps NZ growers to find enough people to harvest their fruit and vegetables, particularly at the peak of the season.

“Without the scheme the labour shortages our industry faces would be a lot worse.”

The latest Ministry of Business, Innovation and Employment (MBIE) survey of employers in the RSE scheme found that 96% agreed the benefits of participating in the scheme outweighed the costs. Employers also continued to rate RSE workers highly in their dependability, productivity and enthusiasm.

“RSE employers in the horticulture industry take their responsibilities seriously. Most go beyond the minimum requirements to ensure workers are well looked after and supported in NZ, and learn skills they can take home,” Chapman said.