Sorting out a ‘bugger’s muddle’ 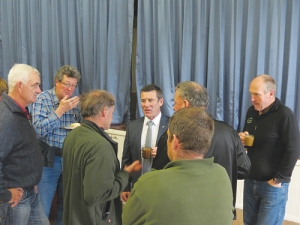 Minister Michael Woodhouse surrounded by farmers with concerns about proposed Workplace Safety regulations at a meeting in Opiki last week.

Woodhouse told a forum of about 150 farmers from the lower North Island that the old legislation was confusing, not easy to interpret and that there was too much of it, which he says supports the need for change.

The meeting last week at Opiki, near Palmerston North, was organised by the MP for Rangitikei, Ian McKelvie. Farmers came from Taranaki and Taumarunui to hear the minister speak.

Farmers vented their frustration about the proposed new legislation and the attitude of the government department responsible – WorkSafe New Zealand. Quad rules were top of the agenda.

While the comments were blunt and to the point, the meeting was orderly, Woodhouse listening intently to what was said.

Taranaki farmer Bryan Hocken was roundly applauded when he claimed WorkSafe was creating fear on farms, behaving like ‘little Hitlers’ and he stressed that farmers would not tolerate being picked on by bureaucrats from Wellington. He warned that unless there was a change in attitude, farmers would stage a protest in Wellington similar to the one over the fart tax.

Others including Hunterville veterinarian Martin Walshe took up the cause of passengers on quads, telling the minister that carrying a passenger on the back of a quad driven by an experienced person was the safest way of getting someone around a farm and that the risk was minimal.  Walshe noted the issue was not as black and white as WorkSafe was claiming and that it was impossible to control the stupidity of some people on farms.

Many speakers described the new legislation as stupid, designed for idiots and showing no understanding of what actually happened and what needed to happen onfarm. A common theme was a call for a “good practical common sense approach” to any legislation.

After the two hour meeting, Michael Woodhouse chatted informally to farmers who continued to express their concerns about proposed legislation. Woodhouse told Rural News that as a result of the meeting he had “a lot of homework to do”.

“I am not one for sitting behind the desk passing a few rules and regulations, expecting everything to be sweetness and light,” he said. “As you can see from the forum, there is a great deal of consternation about some of the things the health and safety regulator has been doing and also a bit of concern and fear about what a new regime might look like.

“I want to assure [farmers] that the new legislation is about prevention, not punishment, and an educational partnership between industry and WorkSafe.”

Woodhouse admits his department has a problem in being perceived by farmers as bureaucrats who want to ‘punish’ farmers; the minister wants this to change. He says collectively farmers have thousands of hours of experience, are individualistic and don’t appreciate bureaucrats coming in and telling them how to suck eggs.

“On the other hand, it is my view that we have an unacceptably high rate of death and injury on our farms. I don’t accept the notion that this is as good as it gets. The question is how to get from one point to the next without wrapping [farmers] in red tape.”

One criticism voiced at the meeting was the lack of communication about the new legislation and Woodhouse promised to investigate this further. But he says farmer organisations such as Beef + Lamb NZ, DairyNZ and Federated Farmers had been widely consulted.

“This hasn’t been helicoptered in from Mars. It was the product of quite a detailed consultation process.”

Woodhouse admits one of the most contentious and high profile issues relates to quad use, in particular the carriage of passengers. He noted that in the past week another quad rider has died on a farm.

He says the issue of passengers on quads is risk assessment and how it is tailored.

Woodhouse wants to get the message out there that WorkSafe is a partner in business not a punisher. But he says this doesn’t mean it won’t issue enforcement notices where appropriate.