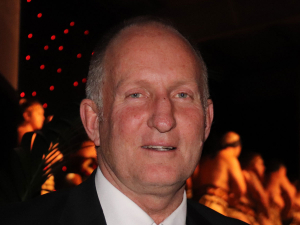 He says the province looks green, but that masks the fact that the province is really dry by their standards. He says they normally count on getting 100mm of rain a month but in March they got just 2mm.

With such a high rainfall the grass usually grows fast and furious, so farmers stock their properties accordingly to take advantage of the lush covers. In other words their stocking rate is high.

The problem is, according to Beef+Lamb NZ’s chairman Andrew Morrison, himself a Southland farmer, is that the paddocks may look green from a distance, but feed is short on farms and it’s further compounded by other factors.

“It’s pretty challenging at the moment because not only do we have a drought, we have on top of that all the problems associated with Omicron,” he says.

Even before Covid there were known staff shortages in meat processing plants, caused by a lack of overseas workers being allowed into NZ – a situation which has angered farmers. Now with Omicron there are massive delays in getting stock killed – in some cases up to ten weeks.

Feds Bernadette Hunt says she’s heard of  farmers who been told their stock will be picked on a certain day, only to find their  booking cancelled at the last minute because of staff shortages at the works that day. She says trucking companies are also caught up in the Covid problem having to reschedule pick-up runs.

Andrew Morrison is full of praise for the efforts of the meat processing companies who he says are communicating well to clients and doing an amazing job in exceptionally challenging circumstances.

For some time farmers have been warned that Covid will cause processing delays and have been urged to book in stock early and de-stock where possible to reduce the pressure on farm. It sounds simple, but in actual fact this has not been easy to do.

Many farmers like Morrison have sold what stock they could on the store market and are now waiting to get prime stock to the works.

“I usually draft every two weeks but the company have said to me I won’t be getting my 250 lambs away every two weeks. They say they are limiting me to 200 lambs every three weeks so I have to try and get more into the store market. The problem there is the store guys like lambs around the 33kg average and often you are in the situation where the lambs are too heavy for the store market but too light for the works. So that middle ground is a bit challenging,” he says.

There is another problem which is coming. Many ewes are going to the ram lighter than they would normally do and only at scanning time will farmers get some idea of their likely lambing percentage, but the unknown maybe how good the lambs dropped will be.

If there is good news, it’s the fact that with droughts, soil temperatures remain high and a good deluge of rain coupled with the application of nitrogen may set Southland pastures firing up again.

The advice of Beef+Lamb NZ and DairyNZ is for farmers to urgently do feed budgets and if necessary adjust their stocking rates to meet feed supply. Both organisations have lots of information on their respective web sites.

In the meantime it’s a waiting and hoping game.

David Walker has been confirmed as the new Government Appointee to the New Zealand Meat Board (NZMB).